The Original Mickey, Volume One 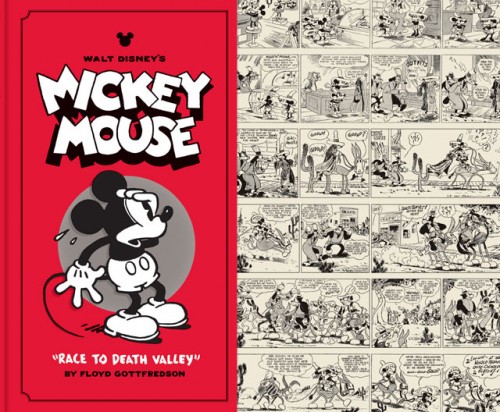 According to an article recently posted by the Christian Science Monitor, Mickey Mouse is about to have a “new” series released about his life as an action hero. This series is a comic strip, started in the 1930’s, that depicts Mickey’s mischievous on-screen nature in a method that Disney had always dreamed of doing himself. In the beginning, the strip struggled, until Disney found its long-term artist, Floyd Gottfredson, who would animate the cartoon for the next 45 years. An icon in the animation world, Gottfredson is accredited with making the Mickey strip into a masterpiece, and an imaginative series that is still greatly sought-after by comic fans and collectors.

Up until now, the strip has only been somewhat reprinted, mostly in Europe. However, Fantagraphics Books will be publishing the original strip in a series of volumes, the first of which will be called, “Race to Death Valley.” Each page will contain three strips with black-and-white reproductions taken straight from Disney’s archives. In addition, the book will contain essays on each of the strip’s authors and characters, as well as rare publicity art and foreign edition cover art.

While the first volume will include some of the series’ more rough and experimental ideas that came before the characters had really found their proper place, this seems like a worthwhile purchase for the traditional Mickey-lover. After all, there is something to be said for the origins of Mr. Mouse and his incredible transformation over the years. Volume 1 is available now and Volume 2 is available for pre-order or order both books in a set “Race to Death Valley – Vol 1 and 2.”.