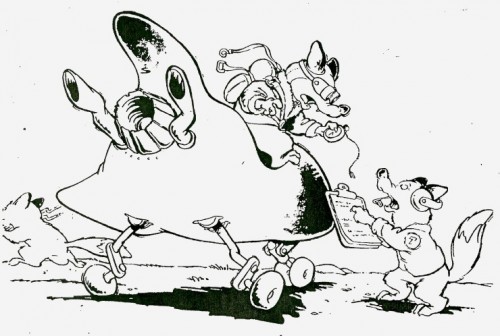 In 2006, Animator Chris Sanders was forced out of Walt Disney Animation Studios when John Lasseter removed him as director of the American Dog movie, which eventually became Bolt. Sanders had previously directed the beautiful and touching Lilo & Stitch and many fans were looking forward to his take on the tale of a dog who crossed America looking for his true self. But we’ll never get to see that film.

It’s important to remember that Chris Sanders had a long history at Walt Disney Feature Animation working on projects like Beauty & The Beast, The Lion King, and Mulan. A couple of those films were produced turning a tumultuous time for Disney animation and the Disney Company in general. It saw Roy E. Disney start a shareholder revolt that eventually ended in Michael Eisner’s ouster, and before that Sparky Katzenberg was kicked to the curb and later set up his own animation studio–Dreamworks. The studio where Sanders is current producing amazing films like How to Train A Dragon.

The chief complaint I heard from animators was that management was sticking its nose in places it just didn’t belong and muddying the story. As it turns out Chris Sanders had his own take on that. But it remained mostly unknown until now.

For what looks like a company retreat or meeting circa 1989, Sanders wrote and illustrated a story called “The Big Bear Aircraft Company.” It’s a smart piece that takes aim at exactly the sort of interference Sanders believed to be the cause of Disney’s mediocre slate of animated features. Someone found a copy of the story inside an old “Illusion of Life” book and has graciously scanned it and put it online for all of us to read and learn from.

Have you read it yet? I’ll wait.

Considering this was likely penned back in the mid-90s (although some say as late as 1996), it looks like Chris Sanders was worried about competition from Don Bluth. Bluth’s 1986 film An American Tail had just scored the best non-Disney animated box office ever and 1989 saw All Dogs Go To Heaven, a critical and fan favorite but a gentle player at the box office. Alas, the rest of the Bluth library did not perform as well. So perhaps Sanders didn’t have so much to worry about after all.

(Note: If the document was written in 1996, the competition would have been Pixar. Which was just as valid. )

On the other hand, Disney’s string of mediocre hits in the 90s, at the same time Pixar was cranking out hit after hit, lends a lot of credence to Sanders’ complaint (particularly the same plane with a new coat of paint complaint). What’s your take on the current state of Walt Disney Animation Studios? How do they recapture the magic?

Update: In a comment on CartoonBrew, Chris Sanders confirms this was from him and was written around the time of Mulan‘s production (so circa 1996-97). He talks about the complexity (or lack there of) of Disney’s films, and how a debate about the death of the villain at the end of Mulan inspired a lot of his thinking. It also inspired him to completely reverse the usual villain arch in his film Lilo & Stitch.

previousVideopolis – One Man Pixar Medley
nextFirst clips from The Avengers