Trio of Indian Films Arriving in the US Courtesy Disney

For the last decade or so, Disney has really been focused on expanding untapped markets out of Asia. As it turns out Asia includes the sub-continent of India. Under it’s label “Disney World Cinema” Disney’s latest partnership will help it celebrate some of the unique and diverse stories, cultures, and traditions of that world and, perhaps, portray some commonalities with cultures everywhere.

The Walt Disney Studios just released three films from India, Do Dooni Chaar, Once Upon A Warrior, and Zokkomon, in North America. The movies were released simultaneously on DVD, video-on-demand, and digital download and are featured on iTunes

Designed to expand the entertainment options of diverse cultural groups in North America, the movies feature some of the most recognizable local talent from each country of origin. The films are produced in local languages and will be subtitled in English.

More about the films below the jump:

DO DOONI CHAAR is a heart-warming comedy about the dreams and challenges of a middle-class family who take a chaotic journey to fulfill their dream of owning a car and discover the true meaning of family along the way. The film was written and directed by Habib Faisal (co-writer of “Salaam Namaste”) and features Rishi Kapoor, Neetu Kapoor, Aditi Vasudev, Archit Krishna, Akhilendra Mishra, Natasha Rastogi, Supriya Shukla, Mohit Chaddha and Avtar Sahni. Run Time: 111 minutes. Languages: Hindi (subtitled in English) 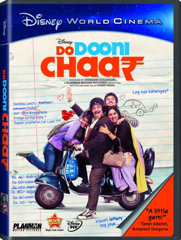 ONCE UPON A WARRIOR

As the first ever Disney Telugu fantasy adventure, ONCE UPON A WARRIOR is about a swashbuckling warrior on an epic quest to save a mystical young girl from a wicked Queen in the ultimate battle between good and evil. In the tradition of “Pirates of the Caribbean” and “Prince of Persia,” the film features an all-star cast including Siddharth, Shruti Haasan and Lakshmi Manchu. The background score is from Salim-Sulaiman and the Music Directors are Koti, Mickey J. Mayer, Salim-Sulaiman and M.M. Keeravani. The film is produced by Prasad Devinini, Prakash Kovelamudi and Written & Directed by Prakash Kovelamudi. K. Raghavendra Rao who has over 100 Telugu films among his credits, is also a producer. Run Time: 133 minutes. Languages: Hindi (subtitled in English) 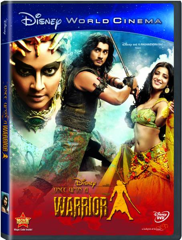 ZOKKOMON
Zokkomon is a thrilling Hindi action adventure film about an ordinary boy who overcomesextraordinary challenges to become a magical hero. The film had its World Premiere at the Indian Film Festival in Los Angeles and a limited theatrical release. Featuring well-known Indian stars Darsheel Safary and Anupam Kher (“Bend it Like Beckham”) the film features music by India’s most popular trio, Shankar Ehsaan Loy. Languages: Hindi (subtitled in English)