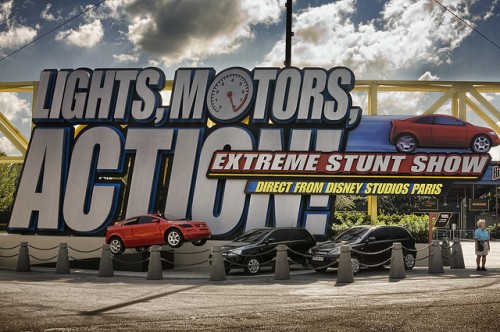 Last week, Disney’s Hollywood Studios welcomed the very first public run of a new segment in the Lights, Motors, Action! Extreme Stunt Show. Featuring the popular character Lightning McQueen, this segment is just about 5 minutes in length, and follows the first major stunt of the show. In the brief act, McQueen chases an enemy spy car all around the set whilst sidekick Mater directs him via video. Luckily, someone from WDWMagic.com was able to get a video of this segment on it’s first run.

While I think it’s a good idea to update the show, seeing as Herbie was previously the star of this segment (and we all know how relevant he is these days), I don’t get a sense of any serious stunting in the new act. That could just be because of the filming, but also — what’s with the trucks? Granted, I have never seen this show live, but after watching a video of an older version, it seems their original purpose was to act as an additional obstacle and prop for the drivers. However, for the Lightning McQueen segment, they seem to be in the way and keep him from doing anything exciting in the main square of the lot. In all, actually, the segment seems pretty boring in comparison with the rest of the show, despite getting to see McQueen live-in-action.

For those of you who have seen the show, how do you think the Lightning McQueen segment measures up? Do you think it was a good addition?