A day after the one sheet for Disney’s John Carter dropped, the LA Times got their hands on some concept art from the movie. The movie is now in post-production (a long period for a special effects heavy movie such as this one), so it’s a bit of a surprise that we’re just getting concept art images now. But Director Andrew Stanton comes from Pixar and they’re notoriously tight about not leaking.

I’m pretty excited to either of these. The one above is of an airship on Mars, known to its natives as Barsoom. The one below is of a city on Mars. 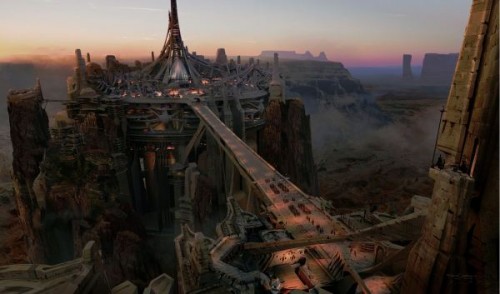 The LA Times also has a fact filled interview with Andrew Stanton where they discuss Stanton’s treatment of the source material.

I’m just as much a fan of all that stuff as anyone, so I didn’t want to repeat anything and I didn’t want to go exactly to where other people had gone. And I certainly recognize the influences coming directly or indirectly from people like Edgar Rice Burroughs. But I haven’t felt the satisfaction [from the other works] that the thumbprint or the identity of the Barsoom books … [gave me] as a kid. I still felt like there was a flavor or a shading or a color that could still feel fresh or special.

They also talked about why they’re not showing the film at Comic-Con, building a Guide to Barsoom, and how important the movie was ‘authentic’. That’s a word Stanton has used a lot, not just on John Carter, but with Wall-E, Finding Nemo, and A Bugs Life. I expect to be just as impressed with John Carter as I was with those three films.