A New Direction for the Disney Store 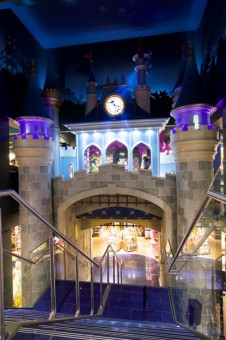 The Disney Store has made an announcement that might come as a shock. While many retailers are closing down stores left and right, Disney Store SVP Paul Gainer gave a presentation at a recent retail industry convention in Las Vegas saying that Disney plans to open 40 new stores around the world this year. Just a few years ago, about 100 Disney stores were closed domestically.

It seems that “quality over quantity” is the new approach. These new stores will be opened in “premier mall locations,” according to Gainer’s interview with the Wall Street Journal. Last week, Disney opened the doors to their biggest European location on Oxford Street in London. This branch will take on a similar feel as Disney’s new interactive store in Times Square. Features include a 28-foot princess castle and magic mirrors. Animation classes, quizzes and lessons on dancing like your favorite character are among events that the store offers for free.

While I haven’t had a chance to visit the London store, I have been to the New York location that inspired it. When Disney announced plans to shut down their 5th Avenue World of Disney and open a new concept store in Time Square, I was eager and excited. But when I finally visited the store, I was pretty disappointed. I can see that children will enjoy the store, which probably was their main objective. However, I think the new concept doesn’t appeal quite as much to anyone beyond adolescence. If Disney continues to open stores that feel more like playgrounds, they might miss out on potential sales from grownups with a headache.

What do you think of these new interactive Disney stores?