Dancing with the Stars: And the Winner Is ….

Hines. Kirstie. Chelsea. Three totally different dancers, three impressive performance portfolios. But there can only be one winner, one person left standing when the confetti rains down and season twelve culminates in a shower of glitter and glee.

But before we get to the results, we have an hour worth of results show to get through. The show opened with the obligatory Parade of Losers, when all of this season’s couples returned to trot around the ballroom for one last hooray. Oh hai, Wendy Williams. Hey there, Lacey’s Partner Whose Name I Have Already Forgotten.

The Black Eyed Peas were tonight’s first musical guests, and they did their usual glowbot thing that they recently did on American Idol. And Fergie appeared to be suspended above the ballroom, singing in all her autotuned glory. She returned to earth (she was singing on a platform), and then … more shtick. Does anyone really care about the Black Eyed Peas anymore? Aren’t they so 2008? Yawn.

There was also a weird segment involving Lacey’s Partner Whose Name I Have Already Forgotten (even after they said it again, I forgot it immediately) trying to audition for the Dancing with the Stars Troupe, and then he came out and performed in a unitard with Lacey and the DWTS Troupe. Crickets.

Some eliminated contestants were allowed another turn around the ballroom – Petra and Dmitry performed their “You Raise Me Up” waltz … with Josh Groban on the microphone. Kendra performed a samba with Louis and DWTS Troupe Men. Anna and Sugar Ray had a “dance battle” with Chris and Cheryl. Romeo and Chelsie did a waltz to “The Greatest Love of All” and the world collectively gagged. There may or may not have been a children’s chorus involved. Ralph and Karina stopped complaining to the press long enough to relive their Prohibition quickstep.

Hey, remember that Design-a-Dance thing Tom and Brooke have been crowing about all season? It finally came to pass – featuring Cheryl, Maks, Lacey, and Chelsie, dancing to  “We Got the Beat,” by the Go-Gos. So there, America. I hope you’re happy.

Tonight, each of our remaining couples were asked to perform one last routine and their scores counted for half of their overall judges’ scores (the other half came from last night’s scores). It’s weird that DWTS pretends like this has any effect whatsoever on who actually wins, but sure, let’s play along:

Chelsea and Mark
Dance: Viennese Waltz
Verdict: Out of all their dances, they opted to relive and retool their Harry Potter waltz. They changed some of the choreography to make it more Len-friendly, and just like before, it was a great routine. Her technique was lovely, and while this wasn’t my favorite dance of hers, I do give her props for going out on a waltz instead of something crazy and flashy.
Carrie Ann: “A lot of people may not have known who you were before this competition, but because of performances like this one, everyone knows who you are now.” – 10
Len: “You are a fantastic dancer.” – 10
Bruno: “We really are all under your spell.” – 10

Kirstie and Maks
Dance: Cha Cha
Verdict: I think it’s safe to say that Kirstie was the weakest link in this finale’s chain of fools (I say that with love), but since she chose to do her first dance over again, it really showcased how far she’s come in this competition. And that’s far. So props to her – she’s been a fabulous contender this season.
Carrie Ann: “I love you for being you.” – 10
Len: “You’ve overcome setbacks, you’ve worked to your strengths, you’ve improved your weaknesses, and tonight, you performed your best dance.” – 10
Bruno: “Kirstie, you cheeky girl! You saved the best for last!” – 10

Hines and Kym
Dance: Samba
Verdict: Hines has rocked it all season, and this was no exception. He’s improved over all these weeks, and he went out on a high note with a fun, entertaining samba. I give extra kudos to Kym for battling through the scariest injury in DWTS history and still getting her partner to the finals.
Carrie Ann: “You are the MVP of Dancing with the Stars Season 12.” – 10
Len: “You bring every dance to life.” – 10
Bruno: “We all fall in love – irresistible.” – 10

I’m glad that’s settled. Those points will have a big effect on the results, indeed.

And then, finally, the moment we’ve all been waiting for. Except, not yet. Sara Evans, former Tony Dovolani partner and DWTS non-winner performed for no particular reason other than “to give the producers time to do the math backstage.” Sigh.

And then, THEN, for realsies, the results. The winner of Dancing with the Stars is … not Chelsea! Nope, she finished third. Surprising! Ah, well. 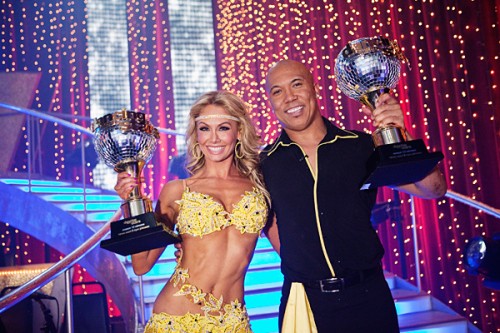 Hines and Kym! He lost the Superbowl, but won the biggest prize of all: the hearts of America (you thought I was going to say the Mirrorball, didn’t you?). Behold, America, our champion. Well-deserved, Hines. You’re amazing, Kym. It was a fun season, and I’m looking forward to the next one. What did you think of the results?

Don’t be a stranger – visit The Disney Chick in the off-season at www.thedisneychick.com.