If you haven’t yet seen it, start at part one of our exploration of Mickey’s new Town Square digs. We’ll going into more detail down below. For those who already saw it, welcome back and away we go.

Starting in the lobby, there is a great new ‘mosaic’ on the floor. The 1901 is a hidden reference to the year of Walt Disney’s birth. Thankfully Disney has resisted the urge to use every square foot of the lobby for selling things. The lobby, as it stands now, has a good balance between the waiting area for Tony’s restaurant, the photo shop, and the entrance to the meet and greet queues. The flow worked nicely. 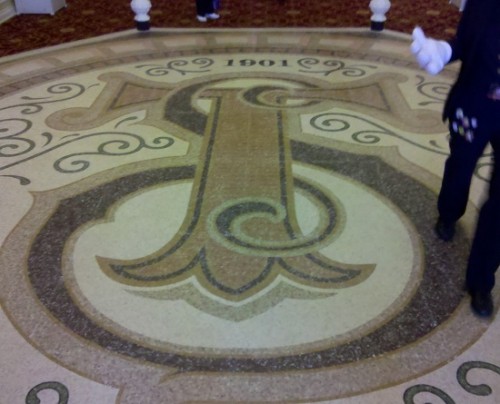 If you look in the door of the queue to see how long the wait is, you’ll get a pretty good feel for the Mickey Mouse queue. As I mentioned, it never grew over 10 minutes the Saturday we were there. But if you look to the back and see no queue for the princesses, keep in mind that there is an extra hidden room that hides a wait of up to 35 minutes (depending on Fastpass volume). I know the princesses are only in this location temporarily, but this blue room is worse than soulless, it’s mind numbing. Can they at least bring in one or two monitors and some wall art like they had in the old location? Better yet, have a play area for the kids and a queue for the adults like at Pooh. 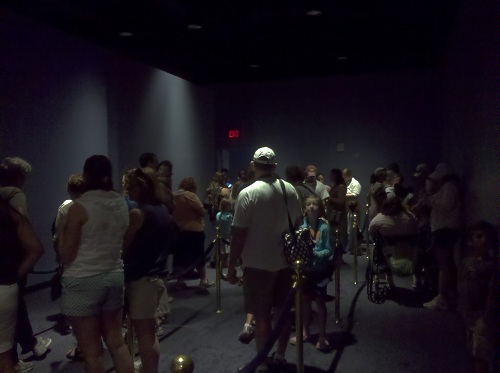 Once you get through this area, you may have an even longer wait in the single room for the Princesses. Which brings me to my other chief complaint about the Princess Meet and Greet. Because there is only one room for the Princesses (as far as I could tell), they only way to speed up the queue is to reduce the interaction time with each Princess. The day I went the queue was pretty small (never longer than 30 minutes) so the the Princesses were generous with their time. But I can see pressure turning this into a photo factory.

Alright follow me below the jump back to Mickey, where the magic is happening:

In the standby queue for Mickey there are some ‘coming attraction’ posters advertising various tricks from Mickey’s magic act. Two of them are actually video screens that come to life with little comic sketches. It’s not quite the Portrait hall at Harry Potter-land’s Hogwarts School of Magic, but it’s at least an attempt to entertain the guests in the queue. Once you’re let into see Mickey you enter a hall and are directed to Mickey’s dressing room. The other rooms says “Rehearsal” instead of Mickey, which is a cute detail. 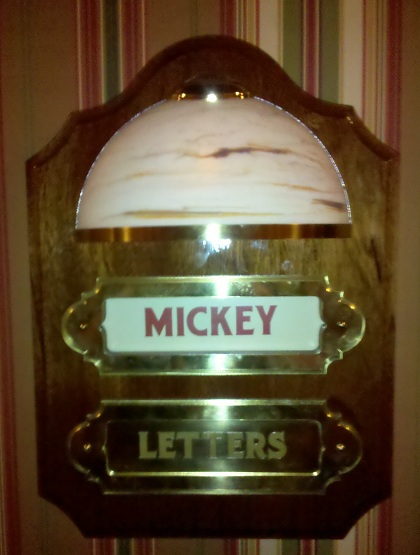 Inside the dressing room, there is a short little queue where approximately 10 guests wait behind a rather large open trunk for your photo with Mickey and Minnie. On the trunk’s back and lid are traveling stickers for each of the other Disney theme parks around the world and the cruise line. Nearby there are also a few posters like this one. I’m not going to give away all the details in this report, but here are a few of the things to look for on your trip. Inside the trunk are potions from Madame Mim. 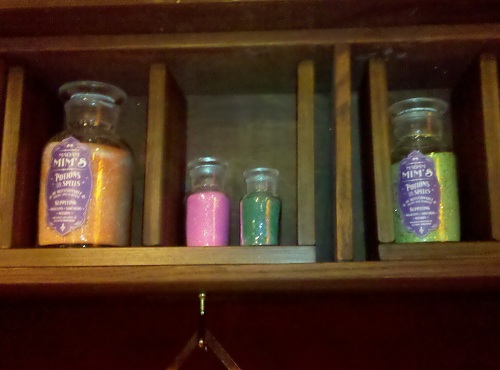 In the smaller trunk among props for various magic trips is one of the room’s hidden Mickeys. I like the humor in the Magicians Manual. Very Disney.

I didn’t get good photos, but there are two animal cages, each with a fun story to tell. A couple of fun easter eggs can be found on this bulletin board. The note from “The Amazing Presto” is a reference to the Pixar animated short “Presto”. There is a hidden Oswald on the young fan mail Mickey posted up. And the band concert poster is, of course, a reference to the 1935 Disney animated short “The Band Concert”, which used to play when this space when Town Square Opera House had a movie theater.  Also Band Concert was the first Disney short in technicolor. 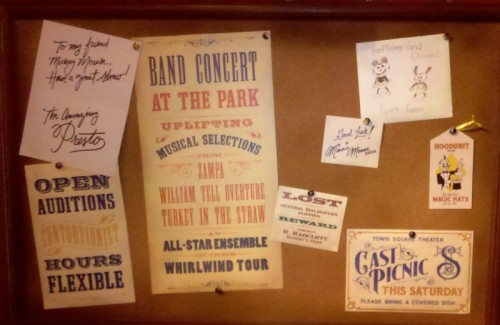 On the desk is another hidden reference to the Toad Vehicle that used to sit in the Town Square opera house. Plus, I think Imagineers just like sneaking in references to Toad where ever they can. 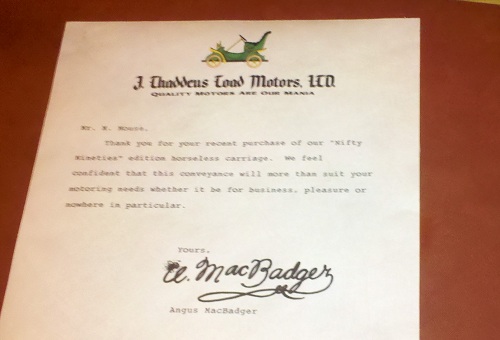 Above the desk and the makeup mirror is a crafty display of the icons from all four parks. The Sorcerer’s Hat from Disney’s Hollywood Studios, The Tree of Life from Disney’s Animal Kingdom, The green globe is Spaceship Earth from EPCOT, and the books represent Cinderella Castle from the Magic Kingdom. That’s a cool detail, even if DHS should move the Hat from in front of the theater… I like that Mickey had this blueprint of the ‘Saw of Dread’ posted. However a real magician never reveals his secrets, so it’s a bit out of theme. 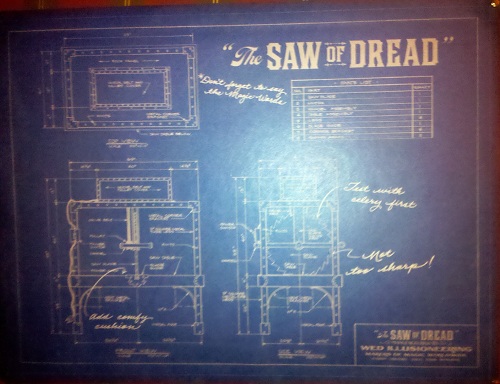 Once you’re done with your personal time with Mickey and Minnie, you’re ushered into the ‘storage’ area of the theater, which doubles as the store. It’s mostly plush and clothing. No collectibles, despite what the sign outside says. High up on one of the shelves is a reminder of the old Toon Town location for Mickey’s meet and greet — the ‘bird house’ version of Mickey’s house that was being worked on in his garage. 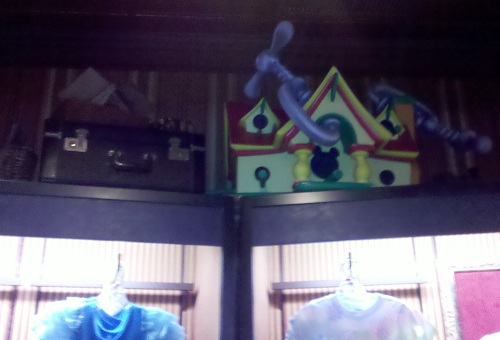 There are also full size models of each of the magic tricks that you saw in the queue posters on in Mickey’s dressing room. As you leave the store, turn right and you’re right back into the lobby area to enter the queue again. There’s actually a nice little mini-lobby there to display some historic materials. I hope Disney takes advantage of that.

A few more thoughts as I wrap up this report.

Fastpass distribution times were moving in unison, which tells me that they never once met their maximum distribution for a time period, and yet, the times were always at least 45 minutes in the future. Disney artificially sets the times ahead. They’re hoping that guests with FP will spend some time browsing the stores on Main Street while waiting for their time to come around.

There are a few additional downsides. Mickey is still silent. We know they have a talking Mickey in Disneyland, why not here. You’re really shuttled through the Mickey Meet and Greet too fast to take in all the great details. Queues were short the day I was there and they allowed us an extra 5 minutes to check everything out (with Mickey showing off some of the details himself). But since they’re only using curtains for the backdrop, couldn’t the cool stuff have been in the queue, even if it was just the inner queue?

Hope you enjoyed this little tour. Mickey’s new digs in Town Square adds a new wrinkle to your travel planning. For now, there’s no need to get in their and see him first thing in the day. Come back a little later and grab a Fastpass to see him with little or no wait. And the addition of a Fastpass for the princesses makes that almost mandatory since there’s nothing going on in that standby queue to entertain the little ones.