A tragedy of giant proportions is playing out in Japan today. An 8.9 magnitude mega-earthquake has rocked the company and then the double whammy of twin tsunami’s swept across much of the country’s coast devastating villages and even threatening operations at a nuclear plant. Additional tsunami warnings are in effect for Hawaii and the west coast of the United States. Everyone please take care and head all warnings to evacuate.

The main impact of the earthquake and tsunami was 200 miles north of the resort. Despite online reports of catastrophic damage, only minor structural damage has been reported and there were no injuries thankfully. This picture of Tokyo DisneySea shows no major damage, but very crowded common areas. 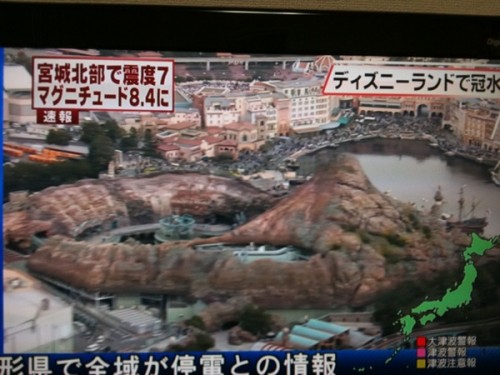 The 69,000 guests in park were evacuated to safe areas and given supplies to shelter in place over night as transportation options were affected by the quake. Twitter user Rezaikram has posted pictures of guests camped out in the common areas of the park. Among the supplies provided were “disposable heaters, plastic bags, and rain coats” according to Rezaikram.

This photo from Disney parks entertainment executive Steve Davison, responsible for many of Disney’s night shows, shows some damage to the Toyko Disneyland Resort. He also reports they’ve been allowed back into their hotel. 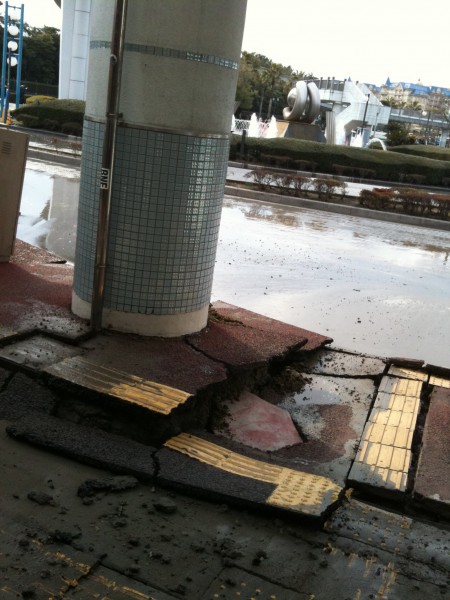 As I post this Hawaii is about 1 hour away from being hit by a Tsunami. So if you’re reading this in Hawaii and haven’t check to see if you should evacuate. Please do so now. All coastal areas of Hawaii are currently being evacuated due to the tsunami warning.  As Disney’s new DVC resort Aulani is on the leeward side of Oahu, it is under some risk of a ‘wrap-around’ tsunami. The hotel is not occupied however, as the resort hasn’t officially opened.

All our thoughts go out to the people of Japan. Stay tuned for more updates related to Disney properties and this mega-disaster as they come in.

After making sure guests and cast members are safe, the next steps for Tokyo Disneyland Resort will be to inspect all attractions, structures, and utilities for damage. Plus, I’m sure the company will reach out to the local community to help as needed.

Update: local news in Japan is reporting that the liquefaction has ‘destroyed’ the Tokyo Disneyland parking lot. Video shows some damage and large puddles.

Update: closure tomorrow and possibly next day now confirmed by TDL park management. Also confirmed that no injuries were reported at the resort.

Update: As much of the liquefaction created flooding in the parking lot is near monorail beams, I think it’s a safe bet that mode of transportation will be down for repairs for a significant period. 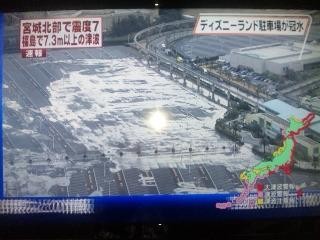 Update: Just to be clear, Tokyo Disneyland was not hit by the Tsunami and is not ‘Flooding’ That picture on Twitter of a water slide with a flood under neath it is NOT from Tokyo Disney Resort. There are no such slides there. The tragic tsunami was 200 miles north. Any flooding is due to rain, pipes breaking during earthquake, and liquefaction causing ground to ‘liquify’ during the quake which results in some sinking. Since Tokyo Disneyland Resort was built on landfill, some liquefaction is to be expected.

Also, thanks to Inside The Magic for finding @davidlandsel a NY Times travel editor who was tweeting about the mood of the crowd (restrained and at times humorous) inside Tokyo Disneyland after the quake.

Guests are now being allowed to leave Tokyo Disneyland, although many have no place to go with trains not running. . It’s voluntary. There is an unconfirmed report that around 30,000 are still inside the parks, I think that was just a number for guests inside one of the parks. The weather is in the 30s, so cast members were handing out blankets earlier.

UPDATE: Cast members now serving guests breakfast. First meal in 12 hours. Major. Kudos to Management and cast members who no doubt Have problems of their own And families to take care of at home.

Update: Reports indidcate that most, if not all, Guests are now out of the park and back at their hotels after being provided breakfast by the park.

3/12/11 – Update: some Tokyo Disneyland cast members are being informed that the parks may not re-open until March 20th or 21st. Trying to find out how much of this is related to damage in the parks and how much is just the time it will take for Tokyo to return to relatively normal business operation.

Update: Disney has informed members of its entertainment cast to report to rehearsal in the park beginning on Monday. At least when they’re on property they won’t have to be standing in queue for food and water. But so far that’s the reality for many of them who have been making updates online.

Note: That was likely the final update on this thread. I’ll be starting a new post regarding the continued impact of the quake on Tokyo Disneyland Resort, its cast members, and guests.