The above is a beautiful sight that millions of visitors have seen at the Magic Kingdom. At first it was home to the Fantasyland station of the Skyway. But since that closed it has just sat there used mostly for stroller parking and the occasional character meet and greet during special events. Now it’s going to be sacrificed to improve one of the most popular attractions in the park and papers were just filed that show how it will be done.

If I had to guess, the Peter Pan queue gets the most complaints from Magic Kingdom guests. It’s a long wait through narrow queues with little or now air conditioning for most of it. The fast pass queue seems to move at light speed while the stand-by queue moves at a snail’s pace. Then the actual ride is over before you know it. Thankfully, plans are now under way to solve that mess and probably add in some sort of Next-Gen queue as well.

The first move will be to move the bathrooms that are adjacent to Peter Pan and reroute the traffic flow through that part of Fantasyland to enter Liberty Square on the other side of the Yankee Trader shop. 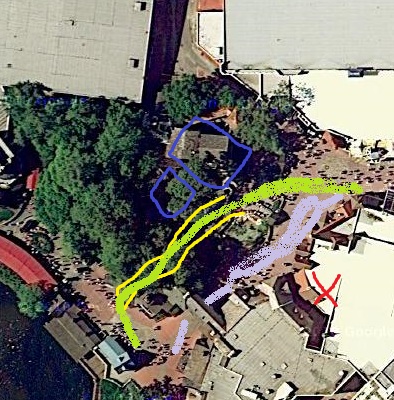 You’ll have to excuse my poor drawing skills, but this gives the general idea. The red ‘X’ is where the bathrooms are now. Fantasyland has definitely outgrown those small bathrooms, so there will be two buildings built across the way (in blue). The old skyway station will go away and a new landscaped path (in green) will direct guests around the Yankee Trader to enter Liberty Square.

I hope this means the new interactive queue at the Haunted Mansion will remove the switchbacks from that part of Liberty Square. Otherwise it’s going to get pretty crowded in there when crowds get busy.

The plans that Disney filed with the county shows that the current walk-way, including the underway beneath the dining room at Harbor House will also remain open. But the reconfiguration does clear the way for the Peter Pan queue to not just expand into the old restroom areas, but also push out a bit into that walkway (the lilac area) if need be.

This is a much needed improvement for Peter Pan and restroom capacity in that area of Fantasyland. It does mean that the meet and greet idea for this area is DOA. But that’s a sacrifice I’m willing to make if it means an improved interactive queue for Peter Pan.

For blueprints, and some pretty nifty overlay work, check out this thread on WDWMagic.