Winnie The Pooh – New One Sheet

A new one sheet for Winnie The Pooh has been released: 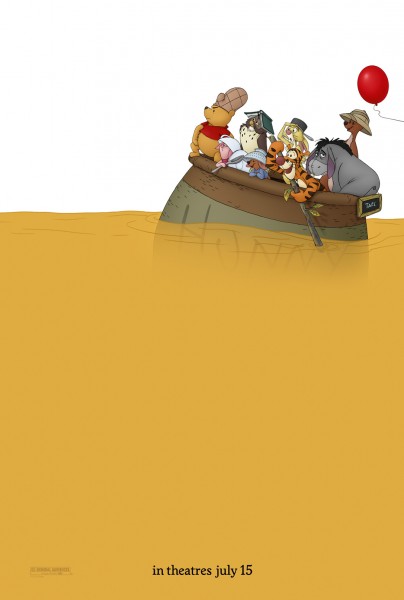 They’re definitely going for less is more with this poster. Also interesting are some of the names that have been attached as voice actors. Craig Ferguson, ruler of the late night talk show, and Huell Howser, who is best known for the public TV show “California’s Gold,” are interesting additions. I do like the idea of having John Cleese as narrator.

More on the movie, including more fun casting facts, in the studio synopsis below the jump:

Walt Disney Animation Studios returns to the Hundred Acre Wood with “Winnie the Pooh.” Featuring the timeless charm, wit and whimsy of the original featurettes, this all-new movie reunites audiences with the philosophical “bear of very little brain” and friends Tigger, Rabbit, Piglet, Owl, Kanga, Roo—and last, but certainly not least, Eeyore, who has lost his tail. “Ever have one of those days where you just can’t win, Eeyore?” asks Pooh. Owl sends the whole gang on a wild quest to save Christopher Robin from an imaginary culprit. It turns out to be a very busy day for a bear who simply set out to find some honey. Inspired by three stories from A.A. Milne’s books in Disney’s classic, hand-drawn art style, “Winnie the Pooh” hits theaters in Europe and Latin America in Spring 2011; the U.S. release date is July 15, 2011.

Notes:
• Veteran Disney animator/storyman/director Burny Mattinson (a key animator on the 1974 featurette “Winnie the Pooh and Tigger Too!”) serves as senior story artist, with a dynamic young directing duo—Stephen Anderson and Don Hall—at the helm.
• Director Stephen Anderson helmed animated films “Meet the Robinsons” and “Journey Beneath the Sea,” among others; he worked as a story supervisor on “Brother Bear” and “The Emperor’s New Groove,” and as an additional story artist on 2008’s award-winning “Bolt.” Director Don Hall is a veteran story artist at Walt Disney Animation Studios with credits including “The Princess and the Frog,” “Meet the Robinsons,” “Brother Bear,” “Home on the Range,” “The Emperor’s New Groove” and “Tarzan.”
• “Winnie the Pooh” welcomes a few new voices to the Hundred Acre Wood: Craig Ferguson (“The Late Show with Craig Ferguson”), Tom Kenny (“SpongeBob SquarePants”) and Bud Luckey (director of the Pixar short “Boundin’”).
• Actress/musician/singer/songwriter Zooey Deschanel (Indie folk band, “She & Him”) provides the vocals for a special rendition of the beloved “Winnie the Pooh” theme song.
• London-born A.A. Milne (1882-1956), a noted writer and playwright, penned two books and several poems about the beloved Winnie the Pooh and Christopher Robin (named after Milne’s son). His books are actually collections of stories, three of which inspired the film.
• A.A. Milne’s son’s teddy bear inspired the beloved character. The child named his bear after Winnie, a Canadian black bear from London Zoo. Pooh was the name of a swan they encountered together.
• Filmmakers visited Ashdown Forest where Milne wrote the books and the real Christopher Robin spent his summer vacations.
• Tony® Award-winning songwriter Bobby Lopez, and his wife Kristen, wrote the six spirited new songs for Pooh and his pals, including “The Tummy Song,” “A Very Important Thing To Do,” “Everything Is Honey,” “The Winner Song,” “The Backson Song” and “It’s Gonna Be Great.” Lopez is composer on several episodes of “The Wonder Pets,” which earned a Daytime Emmy® in 2006 for Outstanding Achievement in Music Direction and Composition.

11 thoughts on “Winnie The Pooh – New One Sheet”