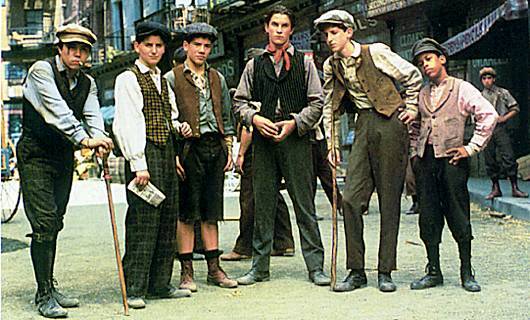 Ladies and Gentlemen, boys and girls, the day you thought would never come is almost here. It’s time to seize the day and buy some season tickets to the Paper Mill Playhouse in Millburn New Jersey. That’s where a new stage version of the cult Disney musical Newsies will produced.

The theatrical production of Newsies will feature the original music from Alan Menken as well as some new numbers. A new book is being written by Harvey Fierstein. In theory they’re excavating the material that resulted in a bomb when the movie was in theaters and writing a few new story lines, including a new female love interest for Jack “Cowboy” Kelly, the part originated by Christian Bales. Menken explains more of his role in the new version in the New York times.

It’s the first step on the road to what Disney Theatrical is hoping will be a revived life for the musical with high school productions and perhaps even a run on Broadway. In the meantime will be keeping our eye on the Paper Mill Playhouse to see what the new version looks like.