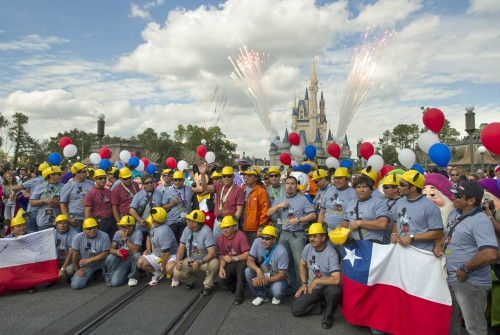 If you were at the Magic Kingdom on Monday you probably saw the rescued Chilean miners as they were paraded down Main Street, U.S.A. in grand fanfare and to the cheers of the crowds. This last week they had enjoyed a Disney-sponsored vacation honoring the miners, their rescuers and their families. And sadly now is the time for them to return home.

Here’s a quick video showing some clips from their adventures in the Magic Kingdom:

More details of the trip Disney gave these heroes below the jump:

Last fall, the world united to celebrate the dramatic rescue of the trapped Chilean miners. Since last Thursday, the miners and their rescuers and families joined in a festive gathering in their honor at Walt Disney World Resort in Florida.

Aboard Copa Airlines, the group of nearly 160 Chileans arrived last week in grand style to Orlando International Airport where they received a ceremonial “water salute” by local firefighting vehicles: a dramatic arch of water rising over the tarmac as the airplane passed underneath.

One highlight of their six-night vacation to Disney was serving as Grand Marshals of the Main Street, U.S.A. parade Monday in Magic Kingdom. The miners and rescuers were greeted by cheers of guests waving Chilean flags in their honor, Disney characters and entertainers pulling out all the stops and the ‘Mayor’ of Main Street proclaiming their special day. To the accompaniment of “When You Wish Upon a Star” their day was capped by daytime pyrotechnics and streamers in a rainbow of colors of the Chilean flag. Later that evening, they watched Cinderella Castle magically transform during the nighttime spectacle, “The Magic, The Memories, and You!”, a projection spectacular starring images of guests shot earlier in the day in the park.

“These courageous men captivated the world with their story of hope and perseverance,” said Disney President and CEO Bob Iger. “Great stories are at the heart of all we do at The Walt Disney Company and we are pleased that the next chapter in this inspirational story is taking place at Walt Disney World Resort.”

The Chilean miners (31 of the 33 miners were able to make the trip) were scheduled later Monday to share their lessons of hope, courage and pride with about 40 youngsters from local Boys & Girls Clubs.

Trapped 2,300 feet inside the earth for 69 days in a collapsed Chilean mine, the men were pulled from the darkness in a miracle rescue. In one of 2010’s most compelling stories, their unbending faith and endurance sustained them throughout a saga that transfixed the world.

“We are not the heroes,” said Omar Reygada, one of the miners whose comments were translated from Spanish. “Our families and all the people around the world who prayed, wished us well and helped us through our ordeal – those are our real heroes.”

During their Walt Disney World vacation, the miners also will be treated to a keepsake group photo in front of Cinderella Castle and personal photo albums of their visit.

Their departure for home is scheduled for today.