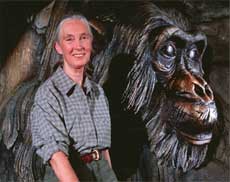 While many people dream of going to Africa to live like renowned primatologist Dr. Jane Goodall, most of us just don’t have the time to pack up and fly around the world, particularly those of us with children. The Jane Goodall Institute, together with their friends at Walt Disney World, are offering you and your family the next best thing: An Exclusive VIP Weekend at Disney’s Animal Kingdom Lodge® featuring the chance to spend time with Jane over President’s Day Weekend.

There cost isn’t cheap, but it includes a lot including what is probably a once in a lifetime opportunity to chill with Dr. Jane with just a couple dozen other people. The dates are Feb 18-21, 2011. So that’s coming up fast too.

· Private VIP transportation provided to and from Orlando International Airport;
· Three nights in a savannah view room in Disney’s Animal Kingdom Lodge®;
· Exclusive breakfast with Dr. Jane Goodall and some of Disney’s famous characters;
· Intimate campfire with Jane Goodall overlooking Disney’s Animal Kingdom Lodge® savannah including stories, hot chocolate, s’mores and more;
· Opportunity to get up close to a variety of spectacular and majestic animals in their backstage habitats on Disney’s special Backstage Safari Tour;
· Gala dinner featuring an exclusive private performance of the Festival of the Lion King;
· Access to Disney’s theme parks with Park Hopper® passes. Transportation to any of the Disney parks is included, along with a Dining Card valid at a variety of locations; and
· More!

Package is for Presidents Day Weekend (February 18-21, 2011). Complete experience includes capacity of up to 30 people. Includes hotel, select meals, unlimited three-day admission to all Disney theme parks, transportation to and from the Orlando airport, and all scheduled events.

Dr. Jane Goodall has ties with Disney’s Animal Kingdom. She advised the creation team and had a sculpture of the chimpanzee she called David Graybeard (seen above) installed near the entrance of “It’s Tough To Be A Bug” under the Tree of Life. She was also awarded the Disney’s Animal Kingdom Eco Hero award at the park’s opening in 1998.