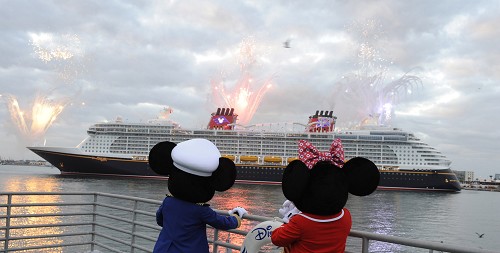 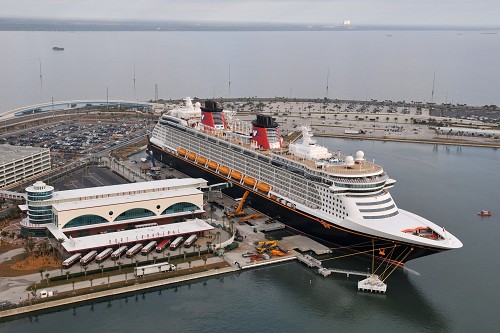 The launch of the Disney Dream will bring sizable economic benefits to Port Canaveral and the region, given the increased capacity of the new ship over the current Disney ships. According to an economic impact study by Martin Associates, the new ship is expected to generate nearly 450 direct, indirect and induced jobs in the area, and attract thousands of additional cruise guests to the port.

“We are delighted to welcome the Disney Dream to its new homeport,” said Karl Holz, president of Disney Cruise Line. “As we grow the Disney Cruise Line business, not only does this mean a positive economic impact for the region, but this allows us the flexibility to provide even more options to our guests. With new innovations onboard and new destinations to explore, ultimately we’re providing even more ways for guests to enjoy a family cruise vacation.”

The recent construction project for Disney’s cruise terminal and dock area in Port Canaveral has also delivered economic benefits. Enhancements include an expanded dock area and terminal facility, along with the construction of a new parking garage connected to the terminal by a sky-bridge walkway.

“This is a special time for us,” says Port Canaveral Chief Executive Officer J. Stanley “Stan” Payne. “We’re thrilled to welcome the Disney Dream home to her expanded terminal facility. We continue to have a great relationship with Disney Cruise Line and we look forward to continuing that for many years to come.”

In addition to the expansion at Port Canaveral, Disney Cruise Line has also made enhancements to its private island Castaway Cay in the Bahamas, to further accommodate the new ship and more guests. From extended beaches and more dining locations, to the addition of private beach cabanas and Pelican Plunge, a new floating water play structure with water slides, the island boasts even more offerings and activities for families to enjoy.

Accommodating up to 4,000 guests, the 130,000-ton Disney Dream takes Disney’s special brand of family cruising to a whole new level with industry firsts such as the AquaDuck water coaster and Magical Portholes that transform inside staterooms into rooms with magnificent views. All of the ship’s new features – combined with Disney quality entertainment, unique dining experiences and age-specific areas for children, teens and adults – create an unforgettable cruise experience for the entire family. A sister ship, the Disney Fantasy, is under construction at the Meyer Werft shipyard in Papenburg, Germany, and will arrive in early 2012. It will sail seven-night eastern and western Caribbean itineraries, also from Port Canaveral. With the addition of two new ships, Disney Cruise Line is offering a wider variety of itineraries and will sail to more destinations around the world, including a repositioning of the Disney Wonder to the West Coast of the United States, sailing Mexican Riviera and first-ever Alaskan itineraries in 2011. Meanwhile, the Disney Magic will spend another summer sailing European itineraries in 2011.

Disney Cruise Line established the blueprint for family cruising when the business launched in 1998. The first two ships, the Disney Magic and Disney Wonder, which set sail in 1998 and 1999, respectively, were purpose built for families to reconnect, adults to recharge and kids to immerse themselves in worlds of fantasy only Disney can create.