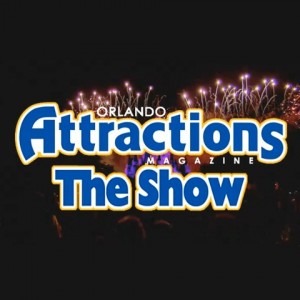 In a relatively short time the Orlando Attractions Magazine has risen to nationwide recognition and not just among theme park fans either. They have a distribution agreement with Barnes & Noble. But the thing about theme parks and attractions is that it really is a multi-sensory experience. Therefore it only makes sense that Orlando Attractions expands to video.

A new free weekly video show has been launched. It’s called “Orlando Attractions Magazine – The Show (opens in iTunes)”. Each Thursday a new 10 to 30 minute show is released in HD on YouTube and as a video podcast on iTunes. Each episode and its description can be found at AttractionsMagazine.com/TheShow
Each show is hosted by two of four local hosts who are also big theme park fans. In addition to giving the news of the week, the hosts frequently broadcast on location from Orlando resorts, theme parks and smaller attractions.

But the show isn’t just talking heads. The news is mixed with videos and on the spot reports from one of the four hosts or the two kid reporters. For an example of just some of the things covered, Episode One took viewers to Mickey’s Very Merry Christmas Party at Disney’s Magic Kingdom and to the IAAPA amusement park expo. Episode Two was recorded at the Gaylord Palms Resort and showed scenes from their holiday Ice and Snow event. Viewers also saw scenes from a new stage show at Busch Gardens and the holiday events at Universal Orlando and SeaWorld Orlando.

Fan submitted videos are also featured on the show, So far they’ve included a fan made Disney commercial, a fan dancing around Disney World and video shot while running a 5K at SeaWorld.

“We’ve been really happy with all the great fan feedback we’ve received since launching the show,” said Orlando Attractions Magazine Publisher and The Show Executive Producer Matt Roseboom. “We’ve been happy to fill the void many fans feel until their next trip to Orlando. But now, in addition to the print magazine, we can bring them the latest news and views of Orlando for free and on a weekly basis.”

Show Producer Jimmy Strater added, “Orlando is the vacation capital of the world yet no one else has ever had a show like ours. Our goals for the show are to be fun and exciting and to be the very best source for information about all things in and around Orlando’s Attractions.”

In addition to The Show, “Orlando Attractions Magazine” is available in major book stores across the U.S. The magazine is also available by subscription and for purchase in a free iPad app. Through the magazine, show and website, Orlando Attractions Magazine covers Central Florida’s theme parks, tourist attractions, restaurants, resorts and more with news, features, photos, videos and interviews.