It’s Magic Music Days right now at Walt Disney World, which means one thing: I had high hopes for the American Idol Experience finale tonight! After all, with singers and choirs galore in the kingdom, surely great singers would be at Idol. My first thought: anyone hoping for an easier shot at the Golden Ticket should avoid the Magic Music Days season. Who needs the stiff competition? But the reality didn’t live up to the fear – the crop of singers was no better than usual, and may in fact have been a bit more juvenile than usual. Maybe the reality is that Magic Music Days is the BEST time to audition? 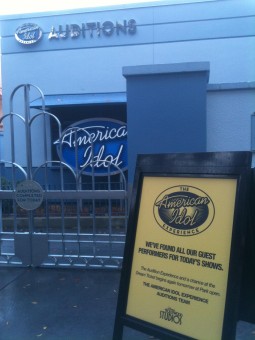 Today’s finale show had five contestants. Some days they apparently struggle to find enough singers for the “regular” shows, and it’s quite common for the audience at those regular shows to be anemic at best. No one is making any noise about closing the attraction that I’ve heard, but at the same time, I would be surprised if it lasted many years in this incarnation.

Do you make it a priority to see this show when you visit DHS? Do you think it will last?