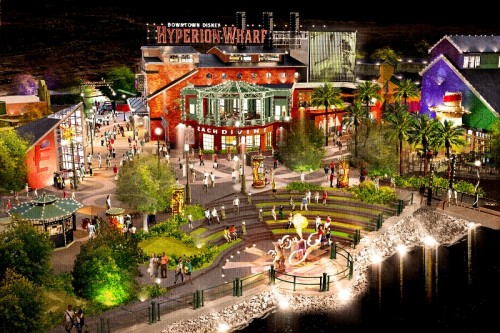 The once popular Pleasure Island section of Downtown Disney had fallen on hard times. attendance was low, employees were being let go, and even its once-popular nightly New Years Eve celebration had lost some of its magic. Add a few other factors, such as the higher pay scale for equity actors, to that and Disney executives knew they had to do something. The fruits of that decision were made public today with new concept art for Hyperion Wharf, a completely re-imagined plan for what was once Pleasure Island.

“We have made great progress since first announcing our vision to bring new shopping, dining and entertainment experiences to Downtown Disney, many of which can’t be found anywhere else and have already become guest favorites,” said Keith Bradford, vice president of Downtown Disney. “We look forward to providing even more ways for our guests to enjoy Downtown Disney, while at the same time creating new jobs for Central Floridians.” 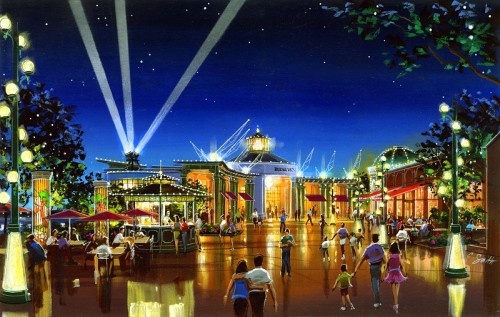 A nostalgic yet modern take on an early 20th century port city and amusement pier will evolve Pleasure Island into “Hyperion Wharf.” By day, the bustling port district will draw guests in with its stylish boutiques and innovative restaurants and by night, thousands of lights will transform the area into an electric wonderland.

What I notice about these designs is how similar they are in feel to Disneyland’s Downtown Disney. It’s a garden park feel, with spots for entertainment, and two-level buildings with shops below and restaurants above. Much more urban than mall. I definitely like that they’re going in that direction. 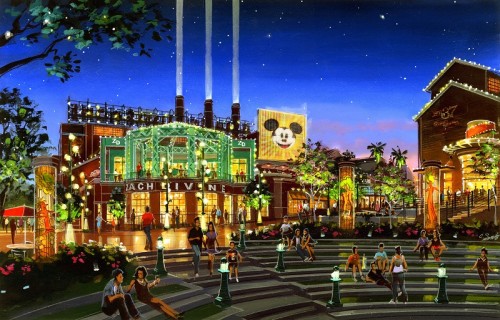 Taking its name from Hyperion, the Greek god of light, as well as the street on which Walt Disney built his first major animation studio, the wharf district will also feature a relaxing lakeside park and enhanced pedestrian walkways. Its diverse eateries will expand dining availability at Downtown Disney by more than 25 percent.

“Hyperion Wharf will offer guests of all ages a vibrant atmosphere and new experiences that can be enjoyed by day or by night,” said Bradford. “Whether looking for a great place to dine with the whole family or a place to relax and enjoy live music, Hyperion Wharf will provide the perfect setting for guests to make new memories with us.”

In addition to the new wharf district, numerous other projects are underway at Downtown Disney, including:

Combined, these projects are expected to create an estimated 600 construction jobs, 500 restaurant, retail and entertainment jobs and support 100 vendor and supplier jobs. That’s always good thing for an area still struggling to recover from the recent great recession.

Yes, I know there is one thing missing from this announcement. The return of Adventurers Club. But I think we’ll have to write that one off to Yesterland for good now. So, besides not having an Adventurers Club, What do you think?