Spotted new packaging a couple of weeks ago at Epcot (then subsequently saw it also in other parks as well). Seems Disney now has character branded chips in the parks!

Characters have long been slapped on pre-packaged goods. Pretzels and various candies leap to mind. And just as you’re unlikely these days to find brand name lollipops or pretzels in the parks (Disney only sells their kind), we are probably likely to see fewer Cheetos and Lay’s in the years ahead. That’s good if you dislike the intrusion of an outside world brand into the park, but bad if you prefer Cheetos to the taste of the Disney one. And there’s probably a point of going too far somewhere. Would you object if Disney didn’t have Coke but instead had a generic soda (like Winn Dixie’s maybe) that they put characters on? 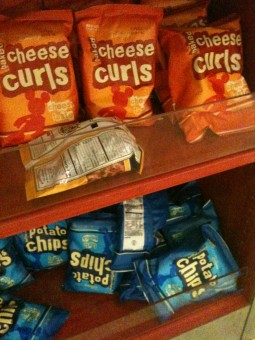