The Orlando Sentinel reports that corporate profits dropped 7% for Disney (an unexpected result) in the fourth quarter, the end of their fiscal year.

Labor costs and sluggish DVC sales were cited as reasons for the performance of Parks & Resorts, which was disappointing from the perspective of the analysts. I’m sure the rest of us would love to have problems like this, where the division is generating $105 million per month in operating profit, or about $3.5 million per day.

(This answers the question of whether each Disney park earns a million in profit per day. Since the $3.5 million is worldwide and includes hotels and cruise ships as well as theme parks, I think we can say the parks make less than a million each.)

The parks are obviously expensive! They make constant adjustments, and not all of them lead directly to profits. 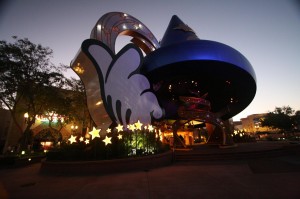 Little improvements always appear at the parks; here, the lighted stars at the base of the hat are new. I’m glad Disney isn’t so concerned with the bottom line that small upgrades are completely ignored. On the other hand, this is enough cash per day to justify fixing the really broken things, like that pesky yeti in Expedition Everest.