‘Tangled’ is Fun, But Could Have Been Better 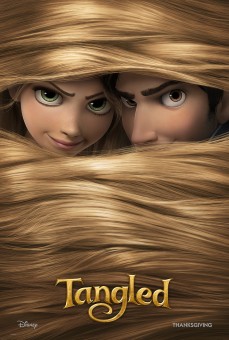 Tangled has as much ‘heart’ and adventure as Pixar’s latest release, Toy Story 3. One of the most moving elements is the backstory of the royal couple and their subjects never forgetting the ‘lost princess’. The chase sequences with lovable rogue Flynn Ryder are generally exciting and work well in 3-D.

Laughs are in abundant supply as well, provided in equal measure by leading and supporting characters (excluding underhanded Mother Gothel) who are as funny as any created by Disney. There’s a blink-and-you’ll-miss-it shot of Rapunzel’s pet chameleon Pascal as a dummy that cracked me up.

But Tangled follows too closely the mold of previous animated musicals from the studio and that results in its greatest weakness.

The team at Disney apparently felt that they had to to make this a musical; it would have worked better not as one. Chief creative officer John Lasseter evidently didn’t challenge this idea.

Alan Menken’s score is stirring when it appears forcefully, but is often interrupted by the weaker original songs, no match for his work with Howard Ashman. During a pivotal scene, the score builds up until it is awkwardly disappears —the scene is effectively restarted to make room for a song.

Another problem area is the introduction, which feels rushed and doesn’t do much to get the audience excited. As for the conclusion, the writers paint themselves into a corner, so that the resolution of danger ends up relying on contrivance and the imagery borrows heavily from Beauty and the Beast.

The final scene helps to make up for this. That may explain why I left the theatre with a smile and a sense that, while Tangled is not perfect, it is definitely entertaining and proof that Disney Animation is slowly returning to the right track creatively.