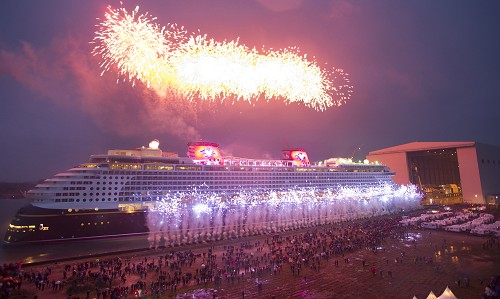 Early this morning near Papenburg, Germany, the third ship in the Disney Cruise Line stable, The Disney Dream, floated out of the dry dock of Meyer Werft in a special ceremony. I’ll miss my weekly peek at construction via the web cam, but look forward to seeing it in person when it reaches its home at Port Canaveral, FL.

USA Today’s Cruise Log was there and has the dramatic photos and here’s a video from the other side of the fireworks:

After 20 months of construction, the Disney Dream cruise ship floated out of the enclosed building dock at the Meyer Werft shipyard today, completing a major construction milestone. The ship was greeted by thousands of visitors lining the shore to see the newest Disney Cruise Line ship, which features the first water coaster at sea and other cruise industry firsts designed to build upon Disney’s commitment to delivering unparalleled family cruises.

The “Float Out” is a special maritime event that celebrates the ship’s final stages of construction, where exteriors become complete and final touches are assigned to interiors. In true Disney-style, the celebration was punctuated with a fireworks display and the appearance of Mickey Mouse and Donald Duck. The Disney Dream is scheduled to sail its maiden voyage on January 26, 2011, from Port Canaveral, Fla.

“Today marks a monumental milestone and begins the first of the finishing touches for the Disney Dream as we prepare to welcome guests aboard our newest ship,” said Karl Holz, president of Disney Cruise Line. “Our guests are counting down to the maiden voyage, and in just 88 days, they will get to experience all that the Disney Dream has to offer.”

The Disney Dream is the first of two new ships being built by the Meyer Werft shipyard in Papenburg, Germany. The Disney Fantasy is also currently in production and is scheduled to set sail on its maiden voyage on April 7, 2012.

“Today is a day of great pride for all of us at the Meyer Werft shipyard,” said Bernard Meyer, managing partner of Meyer Werft. “To finally see the largest ship this yard has ever built floated out and nearly complete is an inspiration within itself, and that coupled with the pixie dust Disney is known for, made this a truly magical moment for all involved.”

The Disney Dream will remain alongside Meyer Werft’s outfitting pier in the shipyard harbor for about two weeks, while testing is completed on the ship’s stabilizers, rudders and other functional features, and work on the ship’s interior areas continues. The ship is scheduled to leave the Meyer Werft shipyard and be conveyed down the River Ems, the second weekend in November, where its destination is the North Sea at the port of Eemshaven, The Netherlands.

Disney Dream Innovations
Known for establishing the family cruise market when the Disney Magic debuted in 1998, Disney Cruise Line continues to build upon this success with a focus on the legacy and heritage of The Walt Disney Company’s most known assets – master storytelling, world-class entertainment and legendary guest service. In addition to all of the features Disney Cruise Line is known for, the Disney Dream will have several new notable innovations for guests to enjoy.

* AquaDuck, a first-of-its-kind water coaster, is an exhilarating, high-speed thrill ride that combines all the ups and downs of a roller coaster with all the twists and turns of a water slide.
* Magical Portholes offer a “virtual window” to the world for inside staterooms, with a real-time view outside the ship where high-definition cameras feed live video to each stateroom.
* Enchanted Art immerses guests in Disney storytelling and looks like other hanging art pieces around the ship, but is actually a framed LCD screen with technology that recognizes a guest is present.
* Remy, an exquisite top-deck restaurant, only for adults, with incredible ocean views and French-inspired, gourmet cuisine by two award-winning chefs.

With the addition of two new ships, Disney Cruise Line is able to more formally expand its itineraries to new destinations, including Alaska, while continuing to offer cruises to some of the line’s most popular itineraries.

The Disney Dream will sail three-, four- and five-night cruises to the Bahamas from Port Canaveral, Fla., while sister ship Disney Fantasy, is set to sail seven-night alternating eastern and western Caribbean itineraries, also from Port Canaveral, beginning in 2012. The Disney Magic will continue sailing seven-night eastern and western Caribbean cruises, before returning to the Mediterranean for another summer of cruising in this region in 2011. The Disney Wonder will begin 2011 by repositioning to the West Coast of the U.S., sailing seven-night Mexican Riviera cruises from the Port of Los Angeles, while spending the summer sailing first-ever Alaskan itineraries from Vancouver.

Based in Celebration, Fla., the Disney Cruise Line experience is focused on providing a setting where families can reconnect, adults can recharge and kids can immerse themselves in worlds of fantasy only Disney can create. Most recently, the company was recognized as the top cruise experience by the readers of Conde Nast Traveler magazine. Disney Cruise Line was voted the No. 1 cruise experience in the magazine’s 2010 Readers’ Choice Awards in the mega-ship category.

3 thoughts on “Disney Dream floats out of Meyer Werft dock”

previousFan Made: Swedish Chef – How to Make a Hot Dog
nextCars Land Topping Off Ceremony at California Adventure