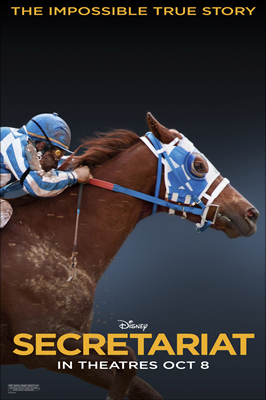 Every other year or so Disney can be relied on to come up with one of those feel good movies based on a true story. This year’s entry is “Secretariat” and there’s a good chance it’s this year’s sleeper hit. Opening October 8th, “Secretariat” chronicles the spectacular journey of the 1973 Triple Crown winner. Housewife and mother Penny Chenery (Diane Lane) agrees to take over her ailing father’s Virginia-based Meadow Stables, despite her lack of horse-racing knowledge. Against all odds, Chenery—with the help of veteran trainer Lucien Laurin (John Malkovich)—manages to navigate the male-dominated business, ultimately fostering the first Triple Crown winner in 25 years and what may be the greatest racehorse of all time.

I’m a big fan of Director Randall Wallace’s films, particularly When We Were Soldiers and Braveheart wasn’t half-bad either. Plus, I’ve had a soft spot in my heart for horse films since seeing Black Beauty as a kid.

* In 1973, Secretariat became the first U.S. Triple Crown champion in 25 years, setting race records that still stand today in the Kentucky Derby and the Belmont Stakes.
* Penny Chenery, now 87, is an integral resource in the making of the film. She also appears as an extra in one of the film’s scenes.
* In 1973, Secretariat graced the covers of three magazines the same week: Time, Newsweek and Sports Illustrated.
* In 1999, the U.S. Postal Service unveiled a 33-cent postage stamp with Secretariat’s image.