A newly released first image of Mother Gothel (voiced by Donna Murphy) from Disney’s next feature animated film, Tangled, has just been released. 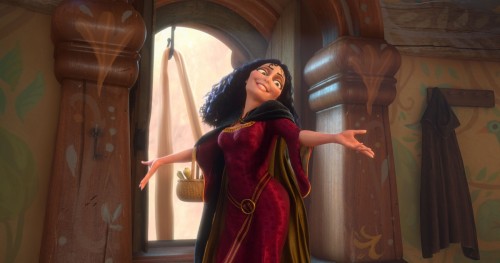 Be sure to follow the film’s Facebook fan page where even more artwork from the film has been released. Tangled weaves its way into theaters beginning November 24, 2010 (probably sooner in NY and LA although I haven’t seen an official announcement).

Walt Disney Pictures presents “Tangled,” one of the most hilarious, hair-raising tales ever told. When the kingdom’s most wanted—and most charming—bandit Flynn Rider (voice of Zachary Levi) hides out in a mysterious tower, he’s taken hostage by Rapunzel (voice of Mandy Moore), a beautiful and feisty tower-bound teen with 70 feet of magical, golden hair. Flynn’s curious captor, who’s looking for her ticket out of the tower where she’s been locked away for years, strikes a deal with the handsome thief and the unlikely duo sets off on an action-packed escapade, complete with a super-cop horse, an over-protective chameleon and a gruff gang of pub thugs. In theaters this holiday season in Disney Digital 3D™, “Tangled” is a story of adventure, heart, humor and hair—lots of hair.

When the kingdom’s most wanted—and most charming—bandit Flynn Rider (voice of Zachary Levi) is taken hostage by Rapunzel (voice of Mandy Moore), a feisty teen with 70 feet of golden hair who’s looking for her ticket out of the tower where she’s been locked away for years, the unlikely duo sets off on a hilarious, hair-raising escapade filled with adventure, heart, humor and hair—lots of hair.

Spoilers below the cut:

Mother Gothel is the wicked godmother of the story. She’s lying to Rapunzel to keep her in the castle where Mother Gothel can take advantage of the magic powers in Rapunzel’s hair.