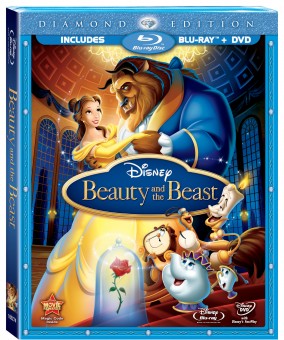 After seven years in the “Disney Vault”, Beauty and the Beast arrives next Tuesday (Oct. 5), for the first time ever, on high definition Blu-ray Disc, in a 3-Disc Diamond Edition* that includes a standard definition DVD of the movie.

Three versions of the film are included: the Original Theatrical Release, Special Extended Edition (with the song “Human Again” and some minor changes), and Original Storyboard Version.

As the first animated film ever nominated for the Academy Award for Best Picture, Beauty and the Beast has been Disney’s most requested film for some time and enthusiasts have eagerly awaited its arrival on Blu-ray.

With a 1080p video transfer of the restored film and new sound mix in 7.1 DTS-HD Master Audio, ‘Beauty’ looks and sounds spectacular. For me, the most visually stunning scenes are the storybook opening and ending. The luminous appearance of the stained glass blew me away. Close-ups of Belle, Beast, Cogsworth, Lumiere and the rest of the characters come in a close second. When it comes to sound, “Be Our Guest” takes the cake, of course. 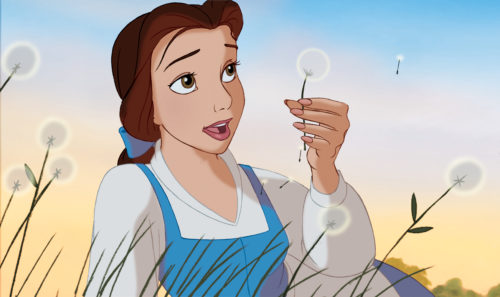 As is to be expected of the second release in Disney’s Diamond Collection, it’s packed with bonus material. Though I’m not a rabid fan of extras, a couple stood out for me.

The “Purdum Reel” is a never-before-seen alternate opening in storyboard form, created when the film was being developed by a team working out of London, led by animator Richard (Dick) Purdum.

This early draft of the story had Belle’s father Maurice as a broke salesman, married to a scheming, selfish woman —an ‘evil stepmother’ for Belle. Gaston was to be a spoiled marquis rather than a chauvinistic hunter. Thankfully, this version never made it to the screen. After six months of work, it was canned, and production on ‘Beast’ was restarted.

The Beyond Beauty documentary series on Disc 2 is also interesting. It has a retrospective feel to it, with key people involved in the production recounting their experiences.

Jeffery Katzenberg, former Walt Disney Studios chairman and current CEO of DreamWorks Animation. He features prominently in the discussion at times and appears in new on-camera interviews —very surprising considering his relationship with Disney since leaving in 1994.

So many features in this Diamond Edition has the unintended consequence of the menus being somewhat complicated. Depending on the player, they may take some time to navigate (that was my experience). Disney seems to be aware of this, having included a paper Blu-ray guide to map out the content on the discs.

The animated main menu is impressive, but its color palette leaves something to be desired. Vibrant ‘Beauty’ colors like gold and blue, used in the packaging, are nowhere to be seen, replaced by stone-grey and light rose tones. 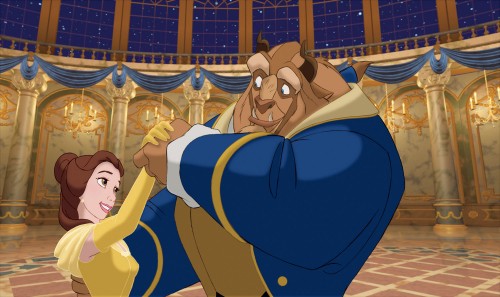 Quibbles aside, this is another quality Disney Blu-ray release. Beauty and the Beast, like other great films, deserves to be seen in high-definition. It’s incredible how much is lost when transferred to standard definition.

But since nearly all the new extras in this title are found on the two Blu-ray discs, Disney will be releasing a 2-Disc Diamond Edition DVD on November 23, for consumers who haven’t made the jump to Blu-ray just yet.

*Sold in either Blu-ray (top) or DVD packaging (view here). Content is the same (2 BDs + 1 DVD); only the order of the discs and case dimensions differs.