Can Eisner return to Excellence? 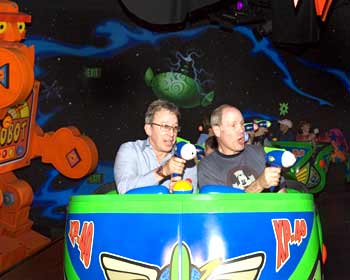 I’ve read a lot of business books in my time, but the one that sticks with me the most is Tom Peter’s revolutionary “In Search of Excellence: Lessons from America’s Best-Run Companies.” The lessons I learned therein have served me well in nearly every aspect of my career.

As it happens the practices of the Walt Disney Company, with Michael Eisner and Frank Wells recently placed in charge, were a central focus of the book. It would be more than another decade, and the tragic loss of Wells, before Eisner lost his way and took the company with it.

Many put the 1995 effort to purchase ABC/Capital Cities, and the ESPN brand, at the peak (or nadir depending on your POV) of Eisner’s reign. In his new book, “Working Together: Why Great Partnerships Succeed

,” Eisner looks back at his career and discusses how these partnerships worked.

In an interview with the AP, Eisner calls the purchase of ESPN “one of the best acquisitions of the century.” You mean Eisner’s orchestrated purchase of the Power Rangers and the Fox Family Channel wasn’t the best?

All this is more significant given Eisner’s recent return to the spotlight. He’s been placed as the next leader of the Tribune Company, a sinking battleship of the newspaper era. His goal there might be to make just one more working partnership. I wonder if he’ll be pitching his wares to current Disney CEO Bob Iger, who came to Disney with the purchase of ABC/Capital Cities.

I could just see that happening.