I sat through at least two showings of Camp Rock 2 with my daughter. Disney is about nothing if not over-exposure, and they showed it on the Disney Channel all weekend long, every night including tonight’s Labor Day holiday.

My admiration of the Jonas Brothers is known to readers of The Disney Blog, but less well known is my admiration for the versatile Ms. Lovato. Disney has a stable full of talented young people, but Demi Lovato is definitely the strong horse, to continue the metaphor. Her versatile vocals are really quite good and she is one of the few, I believe, who doesn’t get put through a voice-over computer generated wash. She can sing, she can dance and she’s got a great deal of charm.

My daughter thinks so, too and seeks to emulate her. She was a Hannah Montana and Miley fan and still is, but I notice something different with Demi and I’m not sure if that she’s older and so Demi’s more adolescent approach appeals to her (as opposed to Hannah’s “tween” approach) or if it’s an honest difference of style. Whatever the case, after each episode of Camp Rock 2, the boom box came out, the toy microphone in hand and she was busy being her favorite rock star.

Camp Rock 2 worked, though I don’t know if it worked for Disney on the High School Musical level. I have theories for this, but none of them are provable. One thing I noticed about HSM is that in the first movie, most audiences were seeing these young actors for the first time. Zac Efron, Corbin Bleu and Vanessa Hudgens weren’t household names until after HSM. In fact, the most well known member of the cast to Disney audiences was Ashley Tisdale because of her role on the Disney Channel program The Suite Life of Zac and Cody (episodes of which I have also sat through endlessly…).

The Jonas Brothers and Demi Lovato, who sort of own Camp Rock 2, are well known to their audiences. These performers come in with recognition and so suspension of disbelief isn’t the entire point. In my opinion, Disney isn’t making enough use of Allyson Stoner, the talented singer and dancer who appears in Camp Rock 1 and 2. She can hold her own and I don’t understand why they don’t let her run. Either way, the film is about the Jonas Bros. and Ms. Lovato. They have an appeal that is beyond simple rock star idol worship and that appeal is a very 21st Century thing—at least, my daughter and her friends have picked it up.

The film is typical Disney Channel fare with a competition against a rival camp, the winner of which takes all. The other camp has to shut down if they lose. The ending is a nice twist that I won’t bother to give away, though and the message that comes through is pretty strong and it’s a good one about how what counts is the music and the friendships.

But the film felt awkward at times and it fell short of its predecessor, which was just fresh enough to be different. The singing and dancing were once again top-notch, but the story was a little bit hackneyed and the relationship between Lovato’s Mitchie and Joe Jonas’s Shane didn’t ever feel realistic. None of the relationships did and that downside drew my attention from the story, which was keyed, after all, on successful relationship building.

I have to confess to being a bit bothered by Disney’s stable of films and shows having as their premise the extraordinary lives of famous people. The Jonas Brothers, Sonny with a Chance, Camp Rock, Hannah Montana—the theme gets pretty old and it would be terrible were it not for the fact that the stars of the shows themselves are alluring to young folks.

Still, Disney hit another home-run here if my daughter is any gauge of measurement. She can’t wait to watch it again and sing the songs along with it. I’m glad she has it—all kids need shows and movies they will be able to look back on and Camp Rock 2 will certainly be one of those.

If you can’t catch Camp Rock 2 on cable, or you want to add it to your library so you can play it at your leisure, OR you want to view some of the special extras that come with a DVD edition, then you’re in luck. Follow us below the jump for details on the DVD: 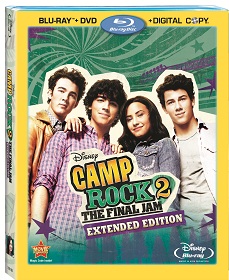 The momentum continues for Disney’s “Camp Rock 2: The Final Jam” when Walt Disney Studios Home Entertainment furthers the TV musical event of the year with the addition of two new musical numbers into the story, in Camp Rock 2 The Final Jam: Extended Edition, a Blu-ray Combo Pack & DVD, on September 7, 2010.

The premiere of “Camp Rock 2: The Final Jam” will be presented across Labor Day weekend with four event telecasts -– each celebrating music and dance with a storyline that suggests life is about the way you play. The fun for kids, tweens and families begins FRIDAY, SEPTEMBER 3 and goes through MONDAY, SEPTEMBER 6 (8:00 p.m., ET/PT, each night) on Disney Channel.

The Extended Edition Blu-ray Combo Pack includes a behind-the-scenes introduction to the newest stars and music videos by camp rockers from around the world, a “Rock-Along” feature that allows viewers to take center stage, and more! Only the Combo Pack includes this Extended Edition in an array of formats: Blu-ray, DVD, and Digital Copy; allowing viewers the versatility to watch Camp Rock 2 The Final Jam anywhere.

Mitchie (Lovato) can’t wait to return to Camp Rock and spend the summer making new music with her friends Shane, Nate and Jason (Joe, Nick and Kevin Jonas). But the slick new camp across the lake, Camp Star, has drummed up some serious competition—featuring newcomers Luke (Finley) and Dana (Bridges). With Camp Rock’s future at stake, will Camp Star’s flashy production and over-the- top antics win the sensational battle of the bands, or will Camp Rockers prove that talent, teamwork, and spirit are what truly matter?

Blu-ray Exclusive Bonus Features:
Everything on the DVD, Plus…