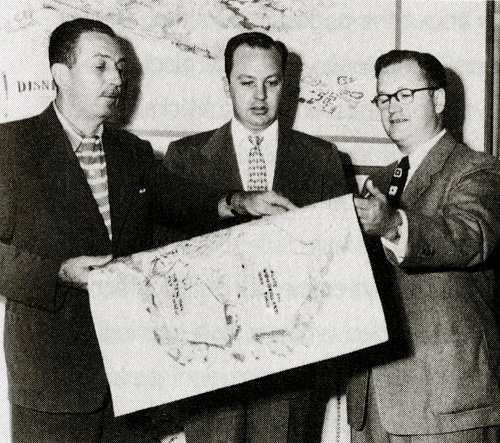 Harrison “Buzz” Price, the research economist who recommended Anaheim to Walt Disney as the location for Disneyland, passed away Sunday, August 15, at the age of 89. He had been in declining health during the last year, his family said, due to a chronic anemic condition.

“Despite his failing health, he continued to demonstrate his trademark humor, cutting edge wit and enduring love for family and friends,” his son David Price said on behalf of his mother, Anne Shaw Price, and the Price family. “His legacy of laughter, wit, love, passion and commitment leaves its mark on each of us – family, friends and colleagues in the leisure and recreation industry he loved.”

Funeral arrangements will be conducted privately by the family.

“Buzz” Price was recognized as the pioneer in the field of theme parks, resort and leisure-recreation project feasibility almost from the day in 1953 that Walt and Roy O. Disney chose him “to determine the economic feasibility of the best location for a new project – Disneyland.” Price, an engineering graduate of California Institute of Technology, had joined Stanford Research Institute after receiving his Masters in Business Administration from Stanford University.

“I asked Walt if he had a bias about the location for his Magic Kingdom,” Price recalled years later. “’Absolutely not!’ he said. ‘You tell me where the best location is.’” Price analyzed the potential sites in the Southern California area, ultimately focusing on Orange County after considering population trends, accessibility and climate factors. They selected 160 acres of orange groves in Anaheim, just off the Santa Ana Freeway at Harbor Boulevard.

“We hit it right on the nose,” Price later recalled, “dead center. That was the perfect place for it.”

Encouraged by Walt Disney, Price formed Economics Research Associates (ERA) in 1958. Ultimately, he conducted 150 studies for the Walt Disney Company (including site and feasibility analysis for Walt Disney World in Florida and Tokyo Disneyland) and “over 3,000 projects” for other clients.

“Buzz was the father of our industry of economic consulting,” notes Ray Braun, Entertainment Practice Leader for AECOM Economics (formerly ERA). “He invented the science. He was mentor to me and many of us in this practice. He set the course and paved the way for us.”

After selling ERA in 1969, most of Price’s projects were under the aegis of his own Harrison Price Company, including studies for eight World’s Fairs, Sea World, Knott’s Berry Farm, Universal Studios, the Six Flags parks, museums, zoos and many feasibility analyses for international projects.

But it was Walt Disney who set Price’s success in motion. “From the time of his first involvement with Dad in selecting the site for Disneyland, Buzz was involved in nearly everything our family did,” recalled Walt’s daughter, Diane Disney Miller. “Dad’s unexpected death left two major projects incomplete … barely begun, actually,”
Diane said. “But they were projects especially dear to Walt’s heart. Uncle Roy (Roy O. Disney, Walt’s brother and Chairman of the Walt Disney Company) led the family in continuing support of the California Institute of the Arts (CalArts), and in the Walt Disney World project in Florida. Buzz was involved in both, but CalArts in particular.

“Before he entered the hospital,” Diane reminisced, “Dad had placed a stack of notebooks in Buzz’s hands, saying, ‘Here, take care of my school for me!’ Dad knew the hands to place his dream in, that Buzz would see it through … and he did.”

Today, according to its President, Steven Lavine, CalArts has an enrollment of more than 1400 students in all the arts – music, dance, theatre, art, film and animation and critical studies/writing. “For almost the entire life of CalArts, Buzz has been our ‘go to’ person where there was a difficult issue to be addressed,” Lavine stated. “He wrote the original feasibility study for this school, and at one time served as chair of virtually every committee, including Chairman of the Board.”

Since opening its doors in Valencia, California, in 1969, CalArts has launched the careers of a “Who’s Who” of creative alumni in animation, film, theatre, dance and music, including John Lasseter, Brad Bird, Tim Burton, Bob Rogers, Ed Harris, Andrew Stanton, Katey Segal, Bill Irwin, David Salle, Mike Kelly and Don Cheadle, among many others.

Recognizing over 40 years of leadership, CalArts in 2005 presented Buzz Price an honorary Doctor of Arts degree. His many leisure-recreation industry honors included the first Lifetime Achievement Award from the Themed Entertainment Association (TEA), induction into the Hall of Fame for the International Association of Amusement Parks and Attractions (IAAPA) and recognition as a Disney Legend.

Michael Eisner, Chairman and CEO of The Walt Disney Company when Buzz was named a Disney Legend in 2003, recognized his role in establishing the Disney parks and resorts. “Buzz Price was as much responsible for the success of the Walt Disney Company as anybody except Walt Disney himself, in that he worked with Walt not only on finding the sites of both Disneyland and Walt Disney World, but on many other new initiatives, like the 1964 New York World’s Fair and the 1960 Winter Olympics in the Lake Tahoe area,” Eisner recalled. “But more than being a pioneer and visionary, he was one of the nicest and most professional and gentle friends of the company.”

Buzz Price’s concepts in economic analysis are clearly spelled out in his seminal book, “Walt’s Revolution – By the Numbers”, published in 2003 by Ripley Entertainment. Buzz’s advice to all: “Guessing is dysfunctional. Ignoring prior experience is denial. Using valid numbers to project performance is rational.” (His friend Terry Van Gorder, former President of Knott’s, called it “roller coaster math.”)

Born May 17, 1921 in Oregon City, Oregon, Buzz Price grew up in
Southern California, graduating from San Bernardino High School before receiving his BS in Mechanical Engineering from Cal Tech, and his MBA at Stanford. While attending Cal Tech, he met his future wife, Anne Shaw, who was attending Pomona College. They were married in 1944.

At the time of his death, after retiring in 2005, Buzz and Anne Price made their home at Mt. San Antonio Gardens in Pomona. Buzz is survived by an artistic family: His wife, Anne Shaw Price, a former vocalist; daughter Holly Shaw Ristuccia, who performs with the Los Angeles Master Chorale, and her husband Al Ristuccia of Claremont, Ca.; daughter and artist Dana Price and her husband Ken Powell of Sausalito, Ca.; son and sculptor Bret Price and his wife Rae Lynn of Orange, Ca.; son and architect David A. Price and his wife Alicia of Irvine, Ca; nine grandchildren, two great grandchildren and his sister, Patricia Scott Mannarino of Oakland, Ca.

To honor Harrison “Buzz” Price’s contributions to Southern California’s culture and community, the Price family suggests contributions to any of “three projects Buzz loved”: the Music Scholarship program at CalArts, where he was a Director Emeritus; the Los Angeles Master Chorale, where Buzz was a founding board member and former President; and Ryman Arts, a program for talented high school artists, where Buzz and Anne Price were founders and board members of the foundation named in honor of their friend, artist Herbert Ryman, who drew the first overall depiction of Disneyland for Walt Disney.

“Few people have created the opportunities for learning and training young talent in the arts as Buzz Price did,” stated Marty Sklar, President of Ryman Arts and retired Vice-Chairman of Walt Disney Imagineering. “Whether we are film, theatre or theme park fans, we should all thank our lucky stars that Walt Disney had a ‘numbers man’ who loved music, art and poetry.”