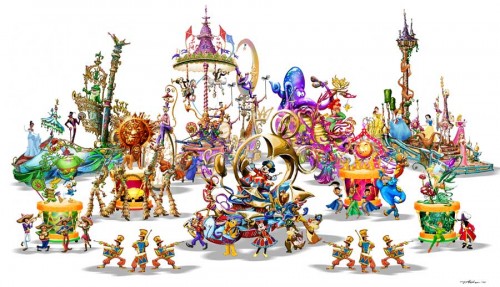 Some new concept art was posted on the Disney Parks blog today for a new parade coming to Disneyland next year – Mickey’s Soundsational Parade. I have to say I’m pretty impressed by the design here. Lots of characters, and five really large floats (although Disneyland parades of yore used to have 16-18 floats sometimes – anyone remember those 45 minute parades?).

I also like that they are returning to the classic drum float design. That makes the parade much more modular, aka easy to keep up with changing times. These drums signal that a lot of the music will be percussion and rhythm based along with melodies from Disney films. Plus there will be original music named, what else, Soundsational!

While I’m happy for Disneyland, this does raise an interesting question. Walt Disney World’s Magic Kingdom turns 40 next year and so far no parade or other celebration has been announced. It’s definitely getting a little late in the game for Disney to be keeping secrets. I hope they’re not planning to skip over the big 4-0. I can still hum Disneyland’s 40 years of adventure theme and would love to add a WDW version.