Disney has been invading New York City’s Times Square ever since Beauty and the Beast opened at the Palace Theater in 1994. With the closure of Tarzan and Little Mermaid, it may appear Disney’s influence is on the ebb, but with my visit yesterday, I found that to be anything but true.

The whole area has been turned into a metropolitan version of Main Street U.S.A. complete with pedestrians walking in the middle of the street, a giant emporium, amusement attractions and, it wouldn’t be Time Square without it, millions of glowing light bulbs. (I’d hate to be the person responsible for replacing those that burn out.)

The ‘Disneyfication’ of New York is astounding and nearly complete. There are still some rough edges, but that’s to be expected in New York. It’s part of the city’s charm. Either way, the tourists didn’t seem to mind, I half expected to see a band marching around or some walk-around characters… Turns out, I wasn’t disappointed.

Join me  below the jump and let’s go on a little walking tour and see for ourselves. The ESPNZone sits closed and already forlorn. Disney claimed they just couldn’t make it work financially with the current market. Just a block from the ESPNZone we find the New Amsterdam theater. This was one of Eisner’s crowning glories in my book. Taking this down on its luck property and rehabilitating it to its former glory was a great move. It housed “The Lion King” for many years and now is host to Mary Poppins. 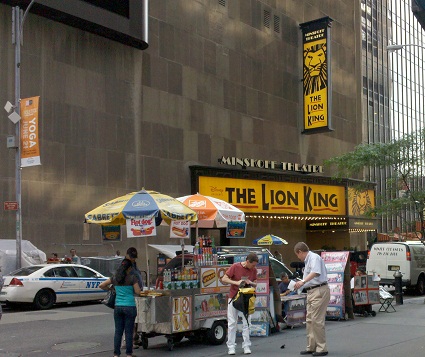 The Lion King has moved down the street to the Minksoff Theater. Gives them a more prominent position and I’m sure, a larger percentage of the tourist dollars. 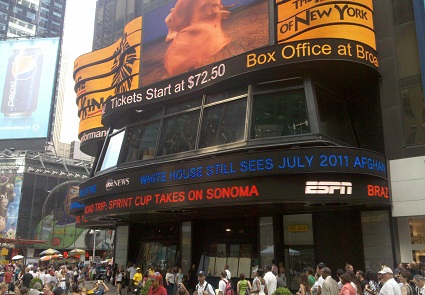 ABC News has a Times Square studio. Nothing was was going on when I was there and the windows had been converted into ads for ABC TV shows. 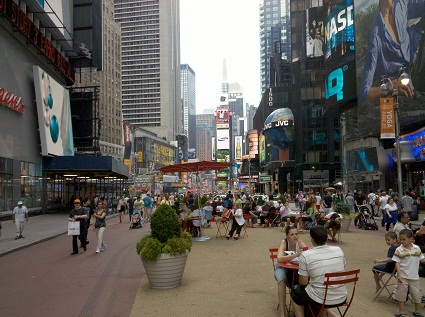 New York closed down Broadway and turned it into a pedestrian mall. This has done a great job of making it tourist friendly and people were everywhere on Sunday. 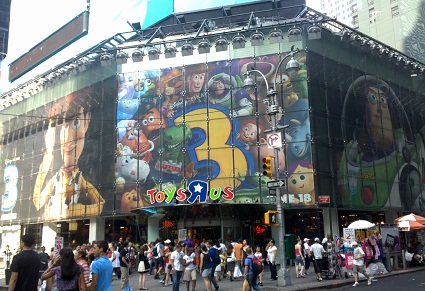 A giant advertisement for Toy Story 3 adorns the outside of Toys’R’Us. The inside of Toys’R’Us shows a clear influence from Disney. Not only is there a giant themed ferriswheel, but each section of the store is a themed ‘land’. It has the effect of making each project more magical by highlighting it 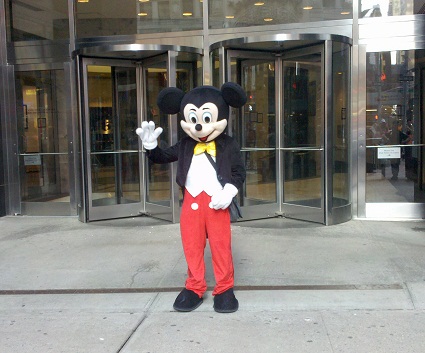 As I mentioned, with all this ‘Disney’ going on, I half-expected to see Disney characters on the street. I wasn’t disappointed. Well, I was, in that this was an obvious fake. Most people seemed to instinctively realize it wasn’t really Mickey and shied away from photos, but a few groups did have their photos snapped with the rat. Apparently, this is not against the law if the suit is homemade and money doesn’t change hands. hmmm 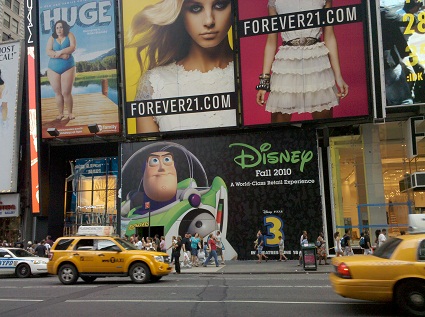 Disney’s not done with their own influence on Times Square. One of the new ‘interactive’ Disney Stores will be opening there later this year. Sandwiched between a jewelry store and a soon to open Forever 21, this property is multi-story and should be very impressive when it’s completed. They’re going to have to have a spectacular store front to compete with all that marketing going on above and around them. 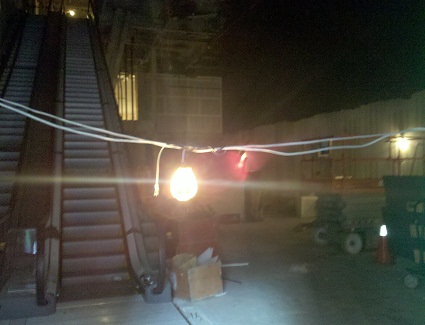 Luckily the doors were open and I was able to grab this shot of the interior. Not much to see here, but with a space like this the potential is very exciting. I can’t wait. I’ll be back in August and hope to get another look at the progress.

And that’s the tour. New York has certainly changed since Walt Disney left New York with his tail between his legs after losing the rights to Oswald The Lucky Rabbit. But I think he would be proud that his vision of an American where every town has a vibrant Main Street has reached even the formerly seedy environment of Times Square.