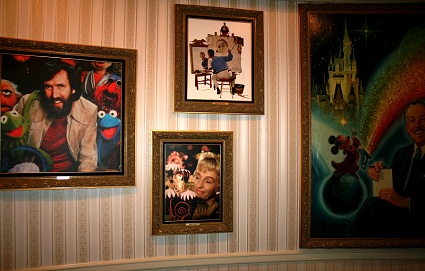 Our west coast correspondent Pam has send along the good news that Imagineer Mary Blair has been given a portrait in the Disneyland Opera House. One wonders if this is a sign of bigger things to come to honor Mary.

Also added was a copy of the famous Norman Rockwell self-portrait. This is fitting as Walt and Norman were friends and Norman had drawn portraits of Walt’s two daughters.

It remains an outrage that neither Mary Blair nor Alice Davis have been given the honor of a window on Main Street. It would also be nice if Lillian Disney could get her own window. Her support of Walt played as much a role in the success of the park as any one. Could these women finally be getting their due.