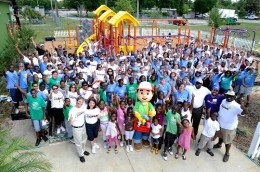 “We are humbled by the tremendous generosity and volunteerism demonstrated by every individual who took part in our playground build,” said Gary Cain, Boys & Girls Clubs of Central Florida president. “We are grateful to our always supportive corporate partner, Walt Disney World Resort, for their continued enthusiasm and dedication to our mission and to the children we serve each year. We also recognize our new friends at KaBOOM! for facilitating this important project. Thanks to both these great organizations and to the hundred of community volunteers who helped to make our dream playground a reality, children in the Pine Hills community have a safe and interactive place to play.” 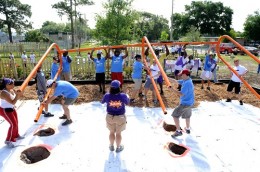 Boys & Girls Club members had a hand in designing the 2,704 square-foot playground, which includes features such as a Slither Slide, a Tic-Tac-Toe activity wall, a Cliff Hanger, a Silo Climber, a Rockblocks Climber, a swing set and much more. In a single day, hard-working volunteers moved more than 48,600 square feet of safety surfacing – enough to cover more than 10 NBA-sized basketball courts. Volunteers also mixed 22,480 pounds of concrete by hand, which is more than the weight of 44 adult tigers.

“Children need safe places to play that encourage healthy, physical activity,” says Eugene Campbell, vice president of Community Relations and Minority Business Development for Walt Disney World Resort. “Disney is honored to have a part in building this playground for the children of Pine Hills. We support Boys & Girls Clubs of Central Florida in their mission to inspire youth to reach their full potential. This new playground will help nurture creativity and aid in the healthy development of children for years to come.”

Disney has committed to honoring volunteers this year by offering free tickets to over 1 million guests who first volunteered in their community. Those tickets have all be claimed, but voluntEARing remains an important part of the Walt Disney World fabric. 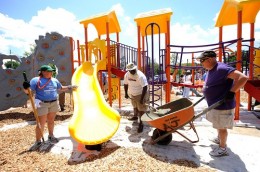 KaBOOM!, a national non-profit organization dedicated to saving playtime, oversaw the playground’s development. The project kicked off with a Design Day on March 17 in which children from the Club and the surrounding community drew their dream playgrounds, which were then incorporated into the final design of the playground built by the volunteers. KaBOOM! envisions a great place to play within walking distance of every child in America. Since 1996, KaBOOM! has used its innovative community-build model to bring together business and community interests to construct more than 1,700 new playgrounds, skate parks, sports fields and ice rinks across North America. For more information, visit www.kaboom.org.