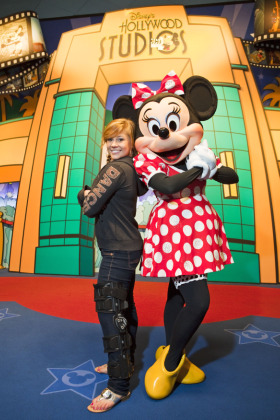 Olympic Gold Medal-winning gymnast Shawn Johnson poses Feb. 27, 2010 with Minnie Mouse at Disney’s Hollywood Studios in Lake Buena Vista, Fla. Johnson, a past champion on ABC-TV’s “Dancing with the Stars” series, was at Walt Disney World appearing at “ESPN The Weekend,” a sports fan festival held annually at the theme park. She also was a special celebrity guest for the grand “re-launch” of the ESPN Wide World of Sports Complex. Johnson had recently injured her leg in a skiing accident and gamely got around on a pair of crutches all weekend.