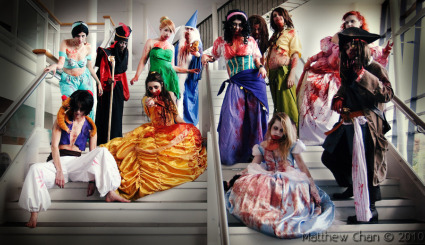 Apparently I go to the wrong conventions, because at the Midlands MCM Expo they have Zombie Disney Cosplay going on. I did some digging and it looks like there is a troupe of Undead Cosplay who are slowly going through the Disney character pantheon and making them all undead. Nice. Check out their deviantArt page which includes some pretty awesome workups like these Zombie Captain Jack Sparrow and Zombie Belle profiles. Not for the squeamish.

Also check out this catwalk video of the “Awesome, but sick” Disney Zombies at the Midlands MCM Expo 2010

Definitely not coming to a theme park near you.