Must be the time of year, on Saturday we rode the Kilimanjaro Safari and were amazed at all the animal babies out on the savannah. Today we get news that a Baby White-Cheeked Gibbon has joined the family at Disney’s Animal Kingdom. 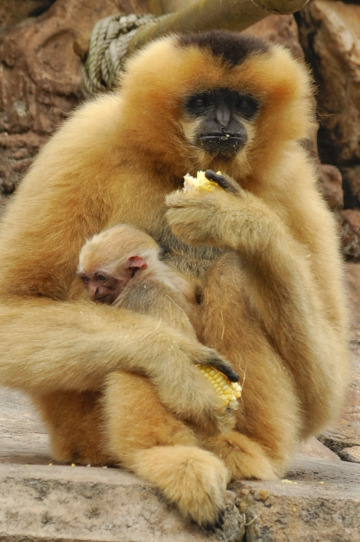 Guests visiting the Asia section of Disney’s Animal Kingdom are getting a glimpse of the latest addition to the park’s family – an endangered white-cheeked gibbon born Feb. 2. Isn’t he cute?

The yet-to-be named male and his mother, Melaka, are bonding well according to the animal experts who oversee the daily care of primates. Guests may see them and the baby’s two sisters, Suki and Tuyen, in their habitat near Kali River Rapids.

This most recent birth is the fourth gibbon born at Disney’s Animal Kingdom as part of the Association of Zoos and Aquariums (AZA) Species Survival Plan which manages genetic diversity among species through detailed records of individual animals. Disney’s Animal Kingdom also participates in AZA Species Survival Plans for several other animals, including elephants, cotton-top tamarins and okapi.

White-cheeked gibbons typically produce a single offspring every two to three years after seven to eight months gestation. Following birth, infants are able to cling to their mothers, allowing the females complete range of motion as they move about the forest with their offspring.

The species is also distinguished by the changing characteristics of their fur which differs by gender and age. While nursing, babies typically maintain a light-brown or golden-colored fur that easily blends with their mother’s coat. Once weaned around the age of one, babies’ fur transitions to black. While the males maintain black fur for their entire lives, female gibbons will change back to golden fur between the ages of six and eight.

· The average life span of the white-cheeked gibbon ranges from 25 – 30 years, but some have been known to live up to 40 years

· An adult gibbon may weigh up to 18 pounds

· They are the fastest and most agile of all tree-dwelling, non-flying mammals

Gibbons are actually Apes, as evidenced by their lack of tails and opposable thumbs.