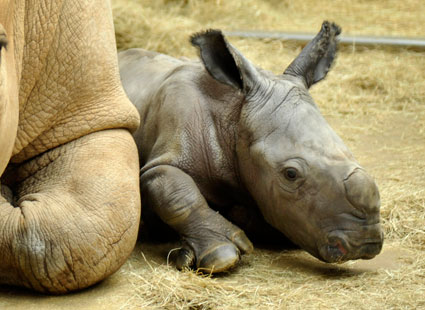 The stork has brought another healthy baby white rhino to Disney’s Animal Kingdom. The park welcomed the female calf to the family last week on Sunday, Jan. 17. Kendi, an 11-year-old white rhino, gave birth to her third baby after the 16-month gestation period. The baby, which has not yet been named, is the eighth white rhino born at Disney’s Animal Kingdom; her mother, Kendi, was the first. Congrats to everyone on the Animal Care team at DAK. You are doing real amazing work for the planet. 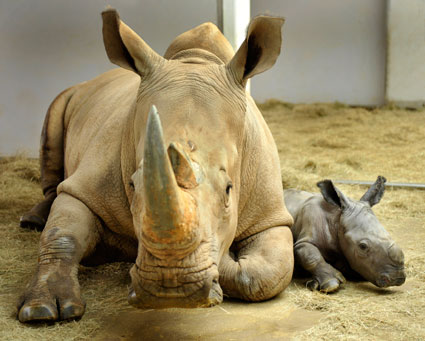 “A rhino birth is considered to be a significant event since the species was once nearly extinct and is currently endangered,” according to Jackie Ogden, Ph.D., vice president of Disney’s Animal Programs and Environmental Initiatives. “Under protection and careful management, this species has grown to approximately 11,000 worldwide, with 190 residing in North American zoos.”

During her first weigh-in on Jan. 22, the newborn weighed 178 pounds. The calf and mother are currently off the savannah bonding at Disney’s Animal Kingdom, but will return to the herd in the coming months.

Disney’s Animal Kingdom participates in a white rhino breeding program coordinated by the Association of Zoos and Aquariums (AZA). The program focuses on sustaining the white rhino population in North America. Many older rhinos in the population have not bred and it is important for the long term survival of the North American population for this species to continue to reproduce.

At Disney’s Animal Kingdom, the success of the rhino breeding program has enabled team members to make a direct contribution to the conservation of white rhinos in the wild. In 2006, Nande and Hasani, two rhinos born at Disney’s Animal Kingdom, traveled to Africa to join four others at Ziwa Sanctuary in Uganda, reestablishing a white rhino population there that had been extinct since the 1980s. Last year, Nande gave birth to the first white rhino born in Uganda in 27 years.