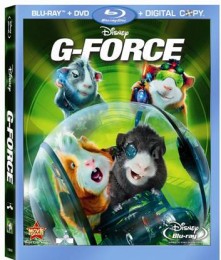 · G-Farce: Bloopers—A collection of light-hearted flubs from the set that prove to err is not only human!
· Deleted Scenes
· Three Music Videos:

Exclusive Blu-ray Hi-Def Bonus Features:
· Cine-Explore with Darwin, Blaster and their Creator—Darwin, Blaster and director Hoyt H. Yeatman reveal the secrets behind G-Force covert operations and the groundbreaking computer graphic work that brought this elite team of Guinea pigs to life.
· Bruckheimer Animated—A retrospective of groundbreaking computer graphic effects in the work of Jerry Bruckheimer, plus an inside peek into the top-secret creation of G-Force’s state-of-the-art visual magic.

· Access Granted: Inside the Animation Lab—Director and computer graphic master Yeatman Jr., takes viewers on an exclusive tour of the high-security facility and shows how the G-Force was animated from initial sketches to completed performances.