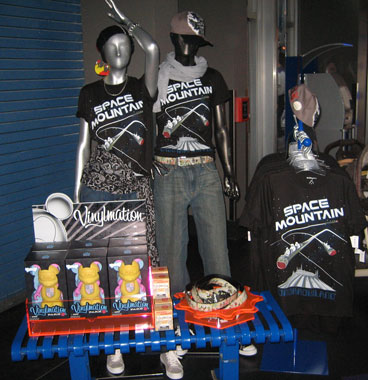 No subtlety from Disney merchandising. This awaits you the moment you step out of the Space Mountain exit queue.

On Sunday we went on a quick visit to the Magic Kingdom to ride Space Mountain. It’s hard to tell exactly how much they did to the track, but what ever they did was mostly cosmetic. It may have been slightly smoother than before, but it was hard to tell.

The change in the queue was the biggest difference. In the long queue that leads from the park and under the train tracks, they’ve added an interactive section to keep guests entertained while waiting to ride. The controls are pretty generic, I imagine so they can change the game mechanics, but it took me most of the 2 minutes I had to play to figure out how the game worked. Not sure how the actual traffic flow is managed by Disney so as to keep guests moving through the attraction at a reasonable pace.

Beyond the game area there is some new traffic flow for queue management. That and lots of sparkly paint on the floor. The switch back area has also had its view of the track cutoff. Instead there is a really nice moving space effect with an orbiting space station and a planet or a nebula depending on which side you’re queuing in.

The actual ride lighting got an upgrade and the cars got some new paint and new seats (still three in a row single style). But there was no reason to shut the whole ride down for this.

The exit queue also got an upgrade. Whereas before it was an ad for FedEx. Now it’s a series of vignettes like living postcards or advertisements for travel into the future.

This remakes the theme of Space Mountain into a Spaceport, where there is an origin and a destination. Spaceport was the original theme when Space Mountain was conceived, so it’s nice to see Imagineering returning to that idea.