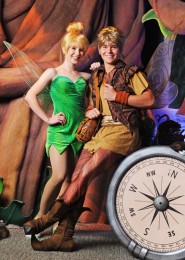 Sparrowmen now have one of their own to pose for pictures with at Pixie Hollow inside Walt Disney World’s Magic Kingdom theme park. The world’s most beloved fairy, Tinker Bell, has welcomed her friend Terence to the photo meet & greet area. The pair star in the new motion picture “Tinker Bell and the Lost Treasure” now out on DVD/Blu-ray.

Terence will be available to pose for pictures with Disney Parks guests in Pixie Hollow at the Magic Kingdom in Florida and Disneyland park in California. (Photo courtesy Disney. Diana Zalucky, photographer)