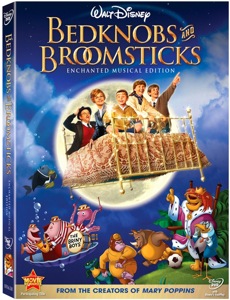 There are few of my favorite childhood movies that hold as special a place as BedKnobs And Broomsticks. Although it was produced after Walt Disney’s death, it continued the Mary Poppins tradition of combining live action with animation, brought on wonderful actors like Angela Lansbury and David Tomlinson, and was chockful of musical tunes to boot. What more could a budding Disney fan want?

How about the new Enchanted Musical Edition DVD? It’s restored and remastered and ready to occupy that empty spot on your shelf.

We have the Sherman Brothers to thank for the songs for the film, including The Age of Not Believing, Portobello Road, and The Beautiful Briny Sea. If that strikes your memory bone, then you’ll want to make sure you watch the best special feature — Music Magic: The Sherman Brothers. Inside Angela Lansbury narrates the history of the development of the songs and you’ll enjoy a rare listen at a song never before heard.

Also knew is the “Wizard of Special Effects” feature that walks viewers through the special effects of the movie and compares them with Disney’s current wizard TV show, The Wizards of Waverly Place.

Bedknobs and Broomsticks is a must have for any Disney fan. The Enchanted Musical Edition DVD captures the family entertainment value you expect from the team at Walt Disney Pictures.

More details of the DVD below the jump:

Although her early attempts at magic create hilarious results, she successfully casts a traveling spell on an ordinary bedknob, and they fly to the fantastic, animated Isle of Naboombu to find a powerful spell that will save England! All-new fun is brewing in this Enchanted Musical Edition, including “The Wizards of Special Effects” feature. Also starring David Tomlinson (MARY POPPINS) and Roddy McDowall, BEDKNOBS AND BROOMSTICKS is a heartwarming adventure viewers will love to revisit!

MUSIC MAGIC: The Sherman Brothers – Take a look behind the scenes from a musical point of view of Bedknobs and Broomsticks with The Sherman Brothers, Angela Lansbury and Scott MacQueen. This featurettes explores the origins of the songs, including what was deleted and what made it into the final version of the film.

DELETED SONG – “A Step in the Right Direction”

previousNew The Princess & The Frog Poster
nextSeaWorld and Universal Studios to be owned by Same Company?