Back in the early days of the internet Walt Disney World featured live Web Cams at the parks. Then sometime around the turn of the millennium they went off line and never came back. It was a big loss for theme park fans who used them to keep a little of the magic alive in between vacations.

For a long time Fans consoled themselves with a weather web cam erected at the Swan & Dolphin that was pointed toward EPCOT’s Spaceship Earth. It wasn’t good for much, but checking weather conditions, and the status of the Yacht & Beach Club after a hurricane rolled through. Then last year, that web cam, too, disappeared.

Well, the Swan & Dolphin has turned it back on. But it’s pointed in a new direction, this time at the Dolphin Hotel. It is still useful for weather observations, but now features a view of the Starwood brand property instead of Disney’s. 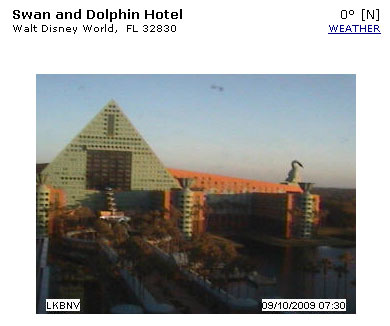 This leaves a void for the Disney fan again. Something the folks at Disney Parks and Resorts can easily fill. All we ask is one camera at each park. They don’t even have to show crowds or sensitive areas. At Disney’s Animal Kingdom (or the Lodge) there should be a Savannah Cam. At Hollywood Studios show the Light’s Motor Action stage (with the big blue hat behind it, so we can keep an eye on the Imagineering promise that it will shortly go away). At EPCOT the beautiful shot from the top of the American Pavilion across the lagoon to Spaceship Earth would be perfect. At the Magic Kingdom a view looking from Splash Mountain to the Castle or from the Contemporary at the Magic Kingdom itself, would be perfect.

All these angles avoid showing guests or maintenance vehicles in the parks. None show backstage areas that might tip off unwanted actions from guests. But they all capture a part of the magic that means a lot to Disney fans for a very small cost investment.

What do you think? Should Walt Disney World flip the switch? Are there any other views you would rather see?

14 thoughts on “Disney World Web Cam — Anyone? Anyone? Bueller? Bueller?”