I’d like to welcome Kevin Yee as a guest author to The Disney Blog. 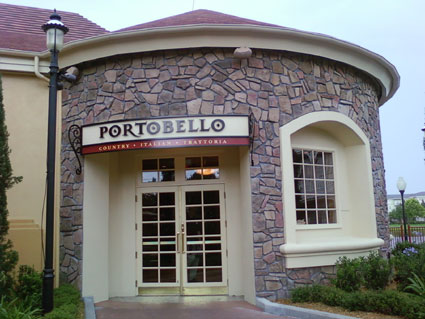 Opened in 1989 as an inaugural part of Pleasure Island, the Portobello Yacht Club maintained the backstory of shipping magnate Merriweather Pleasure, whose warehouses were decimated by a storm, prompting him to convert buildings into restaurants and clubs. The Portobello Yacht Club recently underwent a renovation, emerging with new décor, a new menu, and a shortened name: it is now called just Portobello, since most of the Merriweather Pleasure backstory has been ebbing away at Pleasure Island anyway. 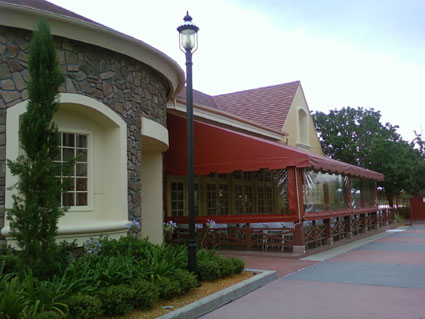 Portobello is owned by Chicago-based Levy Restaurants, whose holdings also include the nearby Fulton’s Crab House (the permanently-docked paddlewheeler) and Wolfgang Puck’s Café. The physical renovation involved tearing down walls and partitions, creating a more open and inviting atmosphere. Todd Moore, Marketing Manager of Levy Restaurants, noted that the effort was intended to “take this restaurant in a great location, change the concept a little bit, and make it more contemporary.” Indeed, it had been 20 years in this location and with that décor, so an overhaul was long overdue. 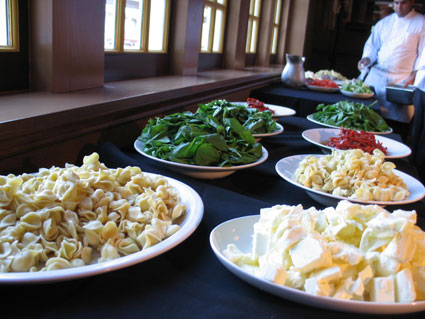 But what exactly is meant by “inviting”? According to Moore, the idea was to invite families to feel like they are at home, and to share the meals. Stacks of small plates are positioned on every table to make such sharing even easier. This effort translates onto the new menu as well. A hefty 48-ounce Porterhouse steak ($79) is meant to be split among at least two people. A brand new menu section of antipasti (meats, cheese, vegetables, crostini) practically begs visitors to buy two or more types for mixing and matching. 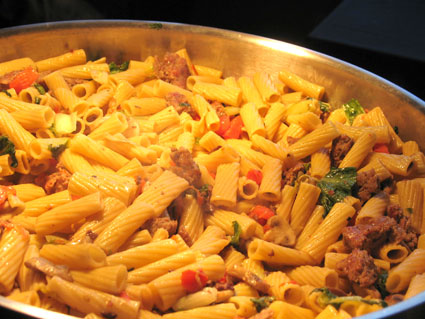 The most revolutionary change to the menu is not about sharing, but about the philosophy behind the recipes. Portobello’s Executive Chef Steven Richard worked with chef Tony Mantuano (from Spiaggia, a fellow Levy restaurant and the highest-rated restaurant in Chicago) to craft a “back to basics” approach. The idea, Richard said, was to institute “classic, authentic items and not adulterate them” by adjusting them for the American palate. These dishes would taste the same way if cooked by a restaurant in Italy. Furthermore, a stated goal was to keep the ingredients list simple (and short), and of course to use the freshest possible food staples. The resulting dishes provide the reasonably good results you might expect, such as the chicken meatball pasta ($22), which has notes of oven-dried tomatoes coming through the most strongly, or the fried mozzarella/risotto appetizer ($10). Yet that’s only the first tier. There’s a whole extra level of excellence in this menu, with dishes such as the Sambuca shrimp appetizer ($14) that drips flavor with every bite of the red bliss potatoes below the shrimp. Rising even higher are such stars as the ravioli gigante ($20) with freshly-made pasta, ricotta, and spinach, touched with tomato, basil, and garlic. Equally stunning in both taste and simplicity is the bucatini ($24), which relies on guanciale (pork), garlic, chili flakes, and olive oil to bring some real heat to your fork. The bucatini has my vote as the best in the house, but frequent visitors are also partial to the rigatoni calabrese ($20), a holdover from the old menu.

While the list of ingredients is short, it would be a mistake to associate “simple” and “rustic” with “bland.” None of the dishes are bland, and most explode with a flavor that’s just a little bit exotic to American taste buds. Even the pizza doesn’t taste like pizza, at least not in the way you’re expecting. The salumi used may look like pepperoni, but it tastes much better. And the pizza sauce, made only of plum tomatoes and olive oil, works well with the devastatingly-fresh mozzarella sprinkled atop, with the net result that every bite manages to surprise you just a little bit.

Portion sizes may give pause to some visitors with especially hearty appetites. The shrimp appetizer, for instance, only comes with four shrimp, and for $14 this will strike many folks as expensive. The entrees, though, are priced in line with similar restaurants, or very nearly so. If you find the entrees still priced too high when compared to other locales, be comforted that the zesty flavors will probably make up for any price imbalance.

Portobello is open for lunch 11:30-4:00, and dinner from 4:00-11:00. Reservations may be made on the Disney line: 407-WDW-DINE, and the restaurant has a direct number as well: 407-934-8888. Since entrees and sauces are made literally to order, they can easily accommodate any food allergy or special request.

You can also find Kevin as a columnist, MiceAge.com and at UltimateOrlando.com where he writes a blog and keeps track of his Disney books.