The Darkness of UP: Anxiety in Pixar’s Films 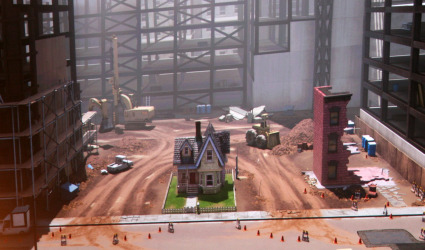 As I reported after seeing Pixar’s animated feature ‘UP’, it is a very adult film with adult concerns (love, loss, anxiety, quests left unfinished) and humor thrown in for the kiddie’s sake. What I failed to see was how this is a trend in Pixar’s films that echos the earliest of Walt Disney’s feature animated works.

But it all became clear to me after finding Michial Farmer’s two very insightful posts on the dark existential dream of early Disney Feature Animation and how Pixar appears to be recapturing that anxiety.

First, moved by watching ‘UP’, which Farmer considers the darkest animated film ever made by Disney or Pixar, he looks back at the early Walt Disney classics and the dark topics they explore.

Here, in other words, is what makes Pixar in 2009 closer to Disney in 1941 than Disney in 2009 or even 1992. All of the early Disney features—for our purposes, let’s define “early” as prewar, which would allow us to work with Snow White and the Seven Dwarfs, Pinocchio, Fantasia, Dumbo, and Bambi—are shiny and beautifully drawn, but all of their prettiness only serves to hide the deep, existential dread at their cores.

That all changes with the post World War II optimism and never lets up.

In his second post, Farmer looks at Pixar’s films and delves into how anxiety, a dark portion of the human condition, is the focus of the central conflict in each film. After brief consideration of the earliest Pixar films, Farmer starts with Monster’s Inc.:

which taps into a very specific but universal childhood fear: the monster in the closet. Never mind that most of these monsters turn out to be essentially good people—the operative point is that there’s a deep-seated need in Monstropolis for children to be afraid. If anxiety is defined (as it is by Kierkegaard, Heidegger, and others) as fear without an object, that’s certainly what we’re dealing with in the world influenced but outside of the movie. Children are afraid of monsters, which deep down they know do not exist—therefore, they are afraid of nothing, of an empty space in their closet. Monsters, Inc. plays off of this fear, exploits it before finally putting it (no pun intended) to bed.

Many people have said that the secret to Walt Disney’s success (other than his massive amounts of hard work and dedication to his dreams and ideals) was his ability to tap into the American gestalt. To intuitively know what audiences would want to see because that was what he wanted to see. The story trust at Pixar has been said to have the same talent. If Pixar is tapping into this sense of anxiety felt across America, what does that say about where America is right now?

See also this Pediatrician’s take on ‘Up’. It’s not a rant against the film, per se, but rather that reviewers aren’t doing their jobs warning parents about the very adult themes in the film Although I disagree with the severity of her claims, you have to know the limits of your own child.

11 thoughts on “The Darkness of UP: Anxiety in Pixar’s Films”