No Doubt pops into Magic Kingdom, not tragic 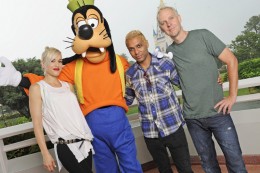 Members of the pop group “No Doubt” (L-R): singer Gwen Stefani, bass player Tony Kanal and guitarist Tom Dumont, pose June 4, 2009 with Goofy at the Magic Kingdom. The group was taking a break from their current concert tour to enjoy a day at the Walt Disney World Resort theme park.

Many of No Doubt’s band members grew up in or near Anaheim, CA and the band’s first big album “Tragic Kingdom” was partly inspired by the original Magic Kingdom – Disneyland and Walt himself. So this is kinda 360 for them.

4 thoughts on “No Doubt pops into Magic Kingdom, not tragic”