Disneyland Resort Lights Up The Night With New Shows And A New Glow! It’s Summer Nightastic!

The first three decades of Disneyland, the park was still struggling to create an identity to attract locals into the park. One of the strategies they employed were themed nights. Usually there would be some performer on the Rivers of America or other entertainment in tomorrowland. Well they’re rolling back the clock this summer at Disneyland and it’s going to be Nightastic! 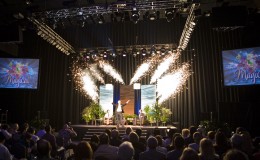 Disneyland Resort will glow like never before this summer as it debuts an all-new fireworks show, Magical, along with sensational new characters and effects that will brighten the Summer Nightastic! lineup of after-dark entertainment.

Guests can see Disneyland Resort in a whole new light as Summer Nightastic! brings nighttime shows and parades to life – bigger, better and brighter. A huge new dragon and other special effects will highlight Fantasmic! Explosive surprises will illuminate the night sky in the all-new fireworks spectacular, Magical. Guests can rock the night away at a new dance club in Tomorrowland. Sparkling new magic comes to “Disney’s Electrical Parade,” as well as to Pixie Hollow, the enchanting home Tinker Bell inhabits with her fairy friends.

The magic will play nightly, beginning Friday, June 12, and continuing through Sunday, August 23, at Disneyland and Disney’s California Adventure parks.

A BOLDER FANTASMIC!
Guests will find new thrills at the popular Fantasmic! on the Rivers of America in Frontierland. The evil Maleficent from “Sleeping Beauty” transforms into a 40-foot tall, fire-breathing dragon. The concept art for this looks pretty good and the original dragon, although fierce, was decidedly low-tech. This should be a good addition to the show. 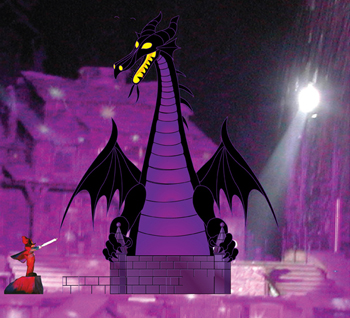 Other recent additions included: Ursula the Sea Witch from “The Little Mermaid” introduces her pet eels, Flotsam and Jetsam, who slither into the show with new power. In addition, the Fantasmic! video projections practically leap off the giant mist screens, thanks to HD (high-definition) technology … (in this case, HD takes on a new meaning – Huge Dragon).

AN EXPLODING CELEBRATION IN THE SKY
Magical is a new Disney fireworks spectacular created especially to celebrate Summer Nightastic! at Disneyland. Tinker Bell is once again your host, waving her wand to ignite the brilliant color, stunning special effects and charming music. But she won’t be alone in the sky this summer. Dumbo will make his surprise airborne debut in the new show. Tink’s sparkling touch awakens a fantastic array of Disney’s most magical characters, from Pinocchio to Mary Poppins to Cinderella’s Fairy Godmother, and the Three Good Fairies from “Sleeping Beauty.”

It was announced that music for “Magical” will be a medley of classic Disney tunes. Greg Smith, who has also scored “Wishes” at Walt Disney World, is the composer. Eden Espinosa, a former Disneyland performer who has been successful on and off Broadway in productions of Wicked, RENT, and Brooklyn, will record the music.

Another highlight of the new fireworks show will be a version of ‘Dumbo’ who will fly right over the castle.

NEW FLOATS BRING NEW MAGIC TO ‘DISNEY’S ELECTRICAL PARADE’
Everything about “Disney’s Electrical Parade” will have a new glow as Tinker Bell leads the way, waving from the basket of a magical balloon aboard a new opening parade float. The parade’s beloved music and floats will feature electrifying audio and lighting technologies, with sparkling pixie dust added to all the parade floats. Snow White and Pinocchio return to the parade this summer as well, after several years’ absence, riding bright new versions of their classic floats.

AN EXCITING NEW DANCE CLUB ‘IGNITES THE NIGHT’ IN TOMORROWLAND
Tweens, teens and families will be drawn to the TLT Dance Club at Tomorrowland Terrace in Disneyland. Dazzling décor will include an illuminated DJ console where the TLT Dance Club DJ will spin the hottest dance tunes, guaranteed to keep Tomorrowland rockin’ all night. Live bands and the hottest Southern California radio stations will appear on select nights throughout the summer.

PIXIE HOLLOW ENCHANTMENT
Tinker Bell and her friends have been welcoming guests into their Pixie Hollow home, tucked into the glen near the entrance to Sleeping Beauty Castle at Disneyland, since fall of 2008. This summer, for the first time, nighttime visitors will find magical surprises as Pixie Hollow and the nearby pond come to life in iridescent light shows. Pixie dust cascades across the landscape and radiates down into the pond. Even the water becomes enchanted as playful fountains spring to life, pop jets perform with whimsical precision, and sparkling strobes shine throughout Pixie Hollow.

More information about Summer Nightastic! can be found at www.disneyland.com/summer.

1 thought on “Disneyland is Summer Nightastic!”