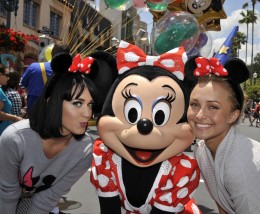 Wearing Minnie Mouse ears, singer/songwriter Katy Perry (left) and actress/singer Hayden Panettiere (right) strike a pose April 25, 2009 with Minnie Mouse herself at Disney’s Hollywood Studios. The duo was enjoying the theme park prior to their evening performance for the Disney Grad Nite, an annual, in-park celebration for high school seniors. Panettiere stars on the hit NBC series “Heroes.” Perry is a multi-platinum recording artist who hit #1 on the “Billboard” charts with two singles from her latest album, “One Of The Boys.” Disney’s Hollywood Studios is one of four theme parks at Walt Disney World Resort. (Photo Courtesy Disney. Gene Duncan, photographer)