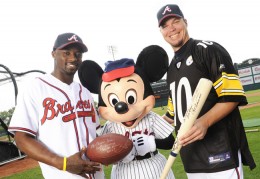 Mickey Mouse warms up with Super Bowl XLIII MVP Santonio Holmes (left) and 1999 National League MVP Chipper Jones (right) as they exchange their #10 jerseys and autographs March 27, 2009 at Disney’s Wide World of Sports Complex. Jones, who plays third base for the Atlanta Braves, is currently playing at the complex’s Champion Stadium during the Braves’ Spring Training season. Holmes, wide receiver for the Pittsburgh Steelers, is training with several of his teammates on the complex’s football fields in preparation for the upcoming 2009 NFL season.

Moments like these are what makes Disney’s Wide World of Sports such a gem. Unfortunately it is still a bit unpolished as far as the Guest experience goes. Getting the ESPN layover and the Bowling Alley would be a big help. But they lost the Buc’s spring training, three Rays regular season MLB games, and the Disney Channel Games this year. So obviously they need to revisit their plan.