I don’t know how it is where you work, but the third shift crew often gets the least recognition in proportion to their responsibilities just due to the fact that they’re out of sight and out of mind. At Disneyland the acknowledge the hard work put in by all the third shift cast members with some fun events like this yearly Breakfast Party. 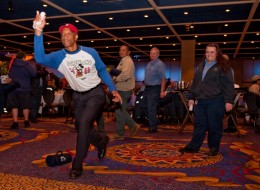 On March 18, about 1,400 third shift Cast Members from around the Disneyland Resort were celebrated during a sports-themed breakfast in the early hours of the morning. These Cast Members are instrumental in gearing up the Resort for its guests – doing everything from pruning trees to cleaning streets and keeping the hotels moving throughout the night. This group normally works behind the scenes while most people are sleeping, however their efforts are clearly visible and highly important to the Resort’s daily operation.

During the breakfast, the Cast Members were acknowledged and thanked by their leaders and Disneyland Resort President Ed Grier. Grier and other executives were on-hand to assist with the event to show their appreciation for the work that is done by these dedicated Cast Members in the early hours of the day. They enjoyed a hearty breakfast, fun games, an opportunity prize drawing and a thank you gift.

To get an appreciation of what the third shift cast members do, get your hands on a copy of the hard to find book “One Day at Disney”.

previousShameless Plug: My Column on Who Will Buy Busch Entertainment
nextVisit Kissimmee, Win a Vacation