The Disney Worldwide Conservation Fund (DWCF) announced it is providing support to the International Fund for Animal Welfare (IFAW) to aid with immediate relief to Koalas (above) and other surviving wildlife affected by the recent bushfires in Australia.

Due to record-breaking heat, the state of Victoria was hit with hundreds of bushfires that have caused massive destruction and is responsible for the deaths of more than 200 people and left nearly 7,000 people without homes. Estimated damages exceed $500 million and have left much of the local wildlife without a sufficient habitat. IFAW, working with Help for Wildlife, has deployed a response team to assist animals such as koalas and wallabies affected in these regions. The team is diligently working to aid as many animals, both wild and domestic, as possible by participating in search and rescue operations, providing necessary treatment, food and vet supplies.

The Rapid Response monies will be used to cover transportation costs, medical supplies, veterinarian services, blankets, cages and food with the intent to rehabilitate the injured and release them back into the wild.

The DWCF is funded in part by guest donations made while attending one of Disney’s theme parks. 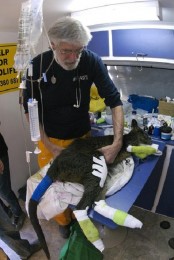