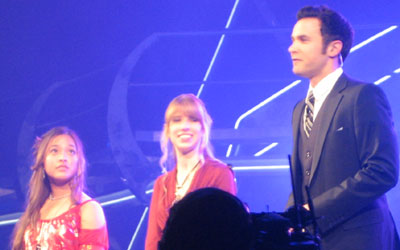 Yesterday was Valentines Day at Disney’s Hollywood Studios and the park celebrated the grand opening of its newest attraction. By the end of the night a dream had come true for one talented singer dressed appropriately in red.

Nearly all signs of the Gala Premiere from Thursday night were gone, the press had moved onto their next story, the American Idol celebrities were off enjoying other parks or on their way home, but for the first time the American Idol Experience attraction was officially open and ready to award the first ‘Dream Ticket’ awarded via a vote of regular park Guests at the first Finale Show.

As far as I could tell, all the shows were packed with every seat occupied. But you could still get there 30 minutes before the show and get in. You’ll need to arrive earlier if you want a seat up close to the stage, but all the seats are good ones (in fact the back rows have their advantages). Also there were almost no noticeable problems with the shows, probably attributable to the long preview run and the quality of the performers in the cast. 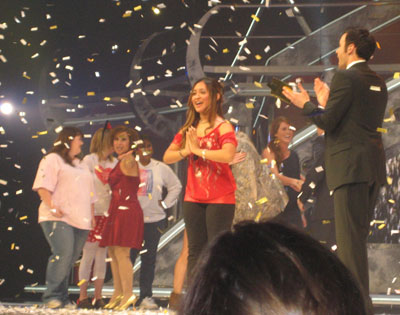 As I walked around the park yesterday I noticed a lot guests sporting ‘Vote for Me’ lanyards. All of them were excited and asking others to vote for them at their show. The ones I talked too had all specifically come to the park to audition for The American Idol Experience. A couple even went as far as bringing a change of clothes for when they were on stage or wearing specific outfits just for the day.

But clearly not everyone in the Finale Show was at the park for the express purpose of winning that ‘Dream Ticket’. The final six (it was supposed to be seven one bowed out at the last minute) were all women. One visiting Walt Disney World with her high school senior class, three who were just here on vacation, and two who came expressly to audition. Three of the people I talked to who came just to audition, didn’t even make it out of their preliminary shows.

The competition was tough, both at the preliminary show I attended and at the finale. It came down to three competitors; any of which deserved a chance at the front of the line fast pass for the real TV show that is the Dream Ticket. I hope the runners up all work on their performances and come back again for another chance at the American Idol Experience. 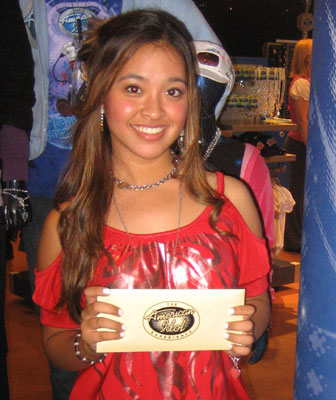 Winner Vanessa Quillao poses with the first ever ‘Dream Ticket’ awarded by the vote of the general admission audience at Disney’s Hollywood Studios’ newest attraction The American Idol Experience.

But there was only one winner voted the best of the day by the attraction audience at Disney’s Hollywood Studios. Vanessa Quillao took home the ‘Dream Ticket’ with her rendition of “No One” by Alicia Keys. Many props to Vanessa for really owning that song and impressing the crowd with her recording star quality performance.

Like many aspiring performers these days, Vanessa has her own YouTube channel where you can see her versions of many other songs. Her video of ‘No One‘ was recorded six months ago, but based on her performance last night, she’s clearly come a long way since then. Already a  successful performer, Vanessa was even named ‘Teen Idol’ in her local community in 2006 and has her own CD released by R&S Records. Unfortunately, she’ll have to be free from any recording contracts to take this ‘Dream Ticket’ and make it all the way to become a future American Idol.

previousDisney XD gets off to great start.
nextDisney and LEGO announce strategic partnership